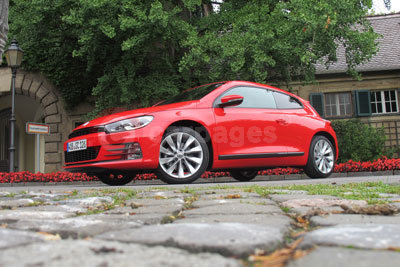 It is more than 40 years since Volkswagen first breezed onto the coupe scene with the Scirocco, named after a Mediterranean wind that comes from the Sahara. The original car quickly earned popularity for its svelte looks, sporty design and fun-to-drive good manners. The same formula still works well today, four decades and three generations of the car later.

The current model has been around on UK roads since 2009, and has undergone a mid-2014 facelift and general update to keep it fresh for another couple of years. That comes ahead of the arrival of the fourth generation Scirocco, scheduled for launch in 2016.

The CO2 emissions outputs are from 109 to 148 g/km, and fuel consumption across the Scirocco range varies from 35.3 mpg to 58.9 mpg. There are four trim levels: Scirocco, GT, R-Line and the range-topping R.

Changes brought in for the recent facelift include a new front bumper featuring GTI-style aerodynamic ‘blades’, and re-designed lights front and rear to give the car a sleeker look. The method of opening the tailgate has also been revised, and adopts a style already seen on the Golf, with the VW badge used as the means of accessing the boot.

Performance and efficiency have been given a boost too, with upgraded power from revised diesel engines that are now meet the latest Euro 6 emissions standards. Three-quarters of all Sciroccos that drive onto British roads from now until 2016 are expected to be diesels.

The 1,968 cc 181 bhp TDI is the strongest performing diesel in the range, and it is a quick car, with lively acceleration and a top speed capability of just over double the British legal limit.

Fuel economy is good for a car with this level of performance, although the 64 mpg promised by the official combined fuel figure is likely to be optimistic if you make liberal use of the power on tap.

There is a smooth delivery of power across the rev range and the car feels lithe and energetic through the gears. If you would rather drive an automatic, the Volkswagen Group's twin-clutch DSG box is one of the best units around as a blend of efficiency and driver convenience.