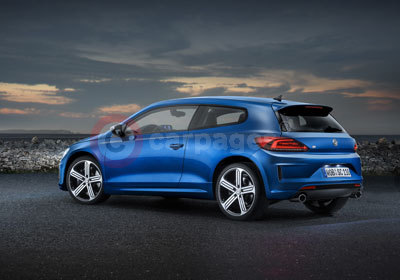 The Volkswagen Scirocco has been given a makeover for 2014; the new model goes on sale on the 20th May with the first deliveries expected in September.

Firstly the dashboard has been revised with new-look dials and an auxiliary instrument cluster above the centre console, consisting of chronometer, charge pressure and oil temperature gauges which harps back to the 1974 models.

The exterior sees a revised bumper featuring aerodynamic ‘blades’ in the outer section with integrated indicator lights, daytime running lights and fog lights.  On models fitted with the optional bi-xenon headlights, the daytime running lights are LEDs within the main headlights. At the rear, all Scirocco now have LED tail lights, while the bumper has been reshaped with;the VW logo badge now acting as the tailgate release handle.

The Scirocco is now available with the choice of six engines, four petrol and two diesel units - all engines meet the stricter EU6 emissions standards. The petrol line-up comprises a 1.4-litre petrol with 125 PS, a new 2.0-litre 180 PS engine and a 2.0-litre TSI 220 PS.  The new Scirocco R is now powered by a 2.0-litre unit producing 280 PS. Two diesel engines are both 2.0-litre units, with the choice of either 150 PS or 184 PS.

Depending on power output both petrol and diesel engines come with a choice of six-speed manual and six- or seven-speed DSG gearbox.