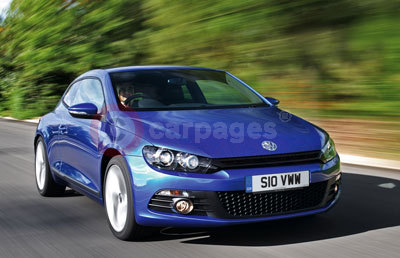 Customers keen to be among the first to drive away a new Volkswagen Scirocco can officially add their names to the waiting list as the car becomes available to order at Volkswagen Retailers across the UK today.  Prices for the new car, which goes on sale on 1 September, have also been announced and start at £20,940 RRP on the road for the launch model, the Scirocco GT 2.0-litre TSI with 200 PS.

The original Scirocco was first seen 34 years ago, and over two generations and 19 years a total of 77,460 Sciroccos were sold in the UK.  Now the new model blows in, with equally distinctive coupé styling, a practical hatchback boot, four-cylinder engine and front-wheel drive – yet this is the most technically advanced production coupé that Volkswagen has produced.

All UK models benefit from Adaptive Chassis Control (ACC) which operates via a set of four electrically adjustable dampers to alter the car’s suspension, steering and throttle response set-up, and allows the driver to choose the most appropriate setting for the journey.  Normal is the default; Sport adds firmer suspension and sharper responses for twisty roads or track driving; while Comfort offers a smooth and controlled ride best suited to motorway trips.

At launch, all Sciroccos will be powered by a 2.0-litre TSI 200 PS engine with either a six-speed manual or automatic DSG gearbox.  Versions with a DSG ’box will command a £1,330 premium over their manual counterparts.  The 2.0-litre turbocharged engine – already popular in the Golf GTI – produces 207 lbs ft of torque from 1,700 rpm and allows the Scirocco to achieve a 0 to 62 mph time of 7.2 seconds before reaching a top speed of 146 mph.  The combined economy figure for the vehicle is 37.2 mpg, with CO2 emissions of 179 g/km.

Early in 2009 a further two engines will join the Scirocco line-up: a 1.4-litre TSI 160 PS petrol and a 2.0-litre TDI common rail diesel unit with 140 PS and a combined economy of around 52 mpg.  Both will come as standard with a six-speed manual gearbox, while the 1.4-litre TSI will also be offered with Volkswagen’s new seven-speed DSG ’box.

Two trim levels will be available – standard Scirocco and Scirocco GT.  The launch engine is only available in combination with GT trim, giving customers a high level of standard specification which includes ABS with ESP, six airbags, touchscreen CD autochanger, climate control, 18-inch ‘Interlagos’ alloy wheels, front foglights and a multifunction steering wheel among a host of other items.  Options are set to include a panoramic tilt sunroof, leather trim and touchscreen satellite navigation.