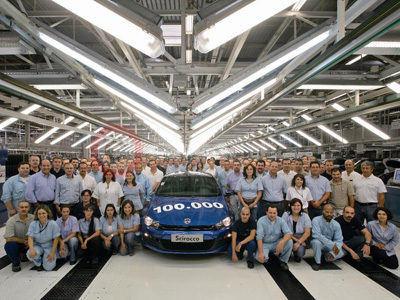 Since its market launch in 1974, the Volkswagen Scirocco compact sports coupe has been the most successful Volkswagen in its segment: 795,650 vehicles were sold up to 1992. Currently, the third generation is being manufactured.

On Friday 6th August 2010, at the Volkswagen Autoeuropa - Automoveis Ltda. plant in Portugal, just two years after its market launch, the 100,000th third generation Volkswagen Scirocco rolled off the production line. Andreas Hinrichs, Autoeuropa Plant Manager, said: "The Scirocco is one of the most important cars that we produce. For myself personally, it was a moving moment."

With its attractive design and sporty appearance, the Volkswagen Scirocco leaves a lasting impression. In 2008, it claimed the AutoBILD Design Award and was named Car of the Year by Top Gear magazine.