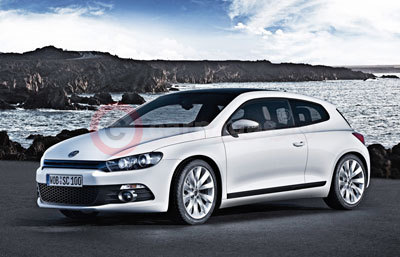 The Iconic Volkswagen Scirocco’s back after a break of over fifteen years. Over two generations and 19 years, a total of 77,460 Sciroccos were sold in the UK alone. The new Scirocco will be the most dynamic and technologically advanced production coupé Volkswagen has ever built.

The essence of the original Volkswagen Scirocco is apparent in its modern day successor.  The mix of distinctive coupé styling, a practical hatchback boot, a transversely mounted four-cylinder engine channelling drive through the front wheels and sharp, responsive dynamics that made the Scirocco such a success at launch in 1974 remains.  Yet every element of the new vehicle’s construction belongs firmly in the present day.

Styled by a team led by Klaus Bischoff, Chief Designer at Volkswagen, the Scirocco draws inspiration from the Iroc Concept, unveiled at the Paris Motor Show in 2006.  Deep front airdams and a razor-thin grille element are framed by twin-lens headlight units.  In a rare departure the Volkswagen roundel has been moved from the grille to the bonnet.  Further back, pronounced haunches that sweep over the rear wheel arches are accentuated by a tapered sill line that pinches around the middle of the vehicle mimicking the look of the original Iroc Concept car.  The haunches flow into the slim high intensity rear light units and a wide, practical hatchback boot, on top of which is a subtle aerodynamic wing.

The aggressive yet cohesive design of the exterior runs into the new Scirocco’s interior.  The driver is placed in a highly supportive front seat beside which are beautifully crafted triangular grab handles.  A contoured, flat-bottomed sports steering wheel frames dials that glow white at night.  The interior is airy and light, while the option of an electrically-operated panoramic sunroof further emphasises the feeling of spaciousness.

Despite the focus on style and dynamics the Volkswagen Scirocco remains practical.  The wide boot aperture leads to a 292 litre luggage space that can expand, via the split folding rear seats, to 755 litres.

The new Scirocco features four, individual sculpted seats finished in a choice of either cloth or leather.  The sports seats aren’t just restricted to those up front – the contoured rear seats feature integrated headrests to offer plenty of support.  Despite the sweeping roofline all four occupants of the Scirocco benefit from extensive headroom.

Key to the advances made by the Scirocco are the new dynamic aids.  All models feature advanced adaptive chassis control offering three driver-selected settings – comfort, normal and sport – allowing a balance between sharp responses and comfortable everyday accessibility.  The system’s influence extends to the steering system: should ‘sport’ be selected the steering firms up to provide more feel while ‘comfort’ mode makes the steering lighter and easier to operate at low speeds or around town.

The Scirocco’s sharp dynamics are linked to a range of powerful yet efficient petrol and diesel engines.  The new model will be launched in the UK fitted with a 2.0-litre T-FSI four-cylinder engine developing 200 PS and driving through the front wheels via a choice of six-speed manual or six-speed DSG gearboxes.  A range of TSI and common rail TDI engines will also be offered linked to six-speed manual and seven-speed DSG gearboxes, from the end of the year.

A comprehensive range of safety features is fitted to the new Volkswagen Scirocco as standard.  These include six airbags, Electronic Stabilisation Programme (ESP) and ABS with Hydraulic Brake Assist.

Full UK specification and pricing will be announced in June when the car will be opened for ordering, prior to the first UK deliveries in September 2008.  Prices for the launch model are expected to start at around £20,000.