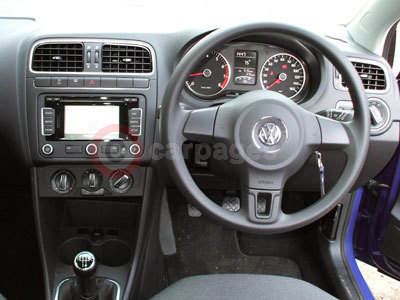 The increase in size has made life a little more comfortable for the rear passengers who now benefit from extra legroom and there is more shoulder room in the front, too. Other interior improvements are evident in the materials and 'slush-formed' soft-touch fascia. The centre console has been angled slightly towards the driver and the traditional blue illumination for the instrument dials is now white in a similar manner to the new Volkswagen Golf.

In fact the new Volkswagen Polo is similar to the Volkswagen Golf in many ways, including looks. This brings the Volkswagen Polo in line with the rest of the VW family, since the arrival of the Volkswagen Scirocco. The front end has the bezel-shaped bumper with a broad, black lower grille and angular headlight clusters. The front spoiler, just like the rear and side skirts, is body coloured but projects a little further than of old to improve pedestrian safety.

If the front emphasises the width of the car, then the side view makes the most of the extra length, tight shut-lines and wheel arches are the key to displaying the thought that went into the car, as well as the perceived quality. At the rear, the VW roundel forms the opening handle of the broad tailgate, while either side, the square-ish taillights are equally angular and the various sections are set in the form of distinctive eyes.

Overall, and despite the sharpening of the car's features, the new Volkswagen Polo appears softer and sleeker than the previous model. It seems to have more purpose and is set to compare favourably with its main competitors, the Ford Fiesta and Vauxhall Corsa.

Volkswagen tells us that the 1.2 (60PS) is expected to be the best-seller, accounting for 13per cent of an anticipated 37,000 sales in 2010, 45 per cent of which are likely to be fleet purchases. Personally, a larger engine would be preferable but when it comes to driving pleasure, general dynamics and handling the awards the Volkswagen Polo has already received are well deserved.