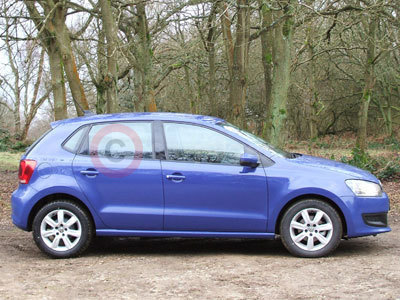 So far, this Volkswagen Polo review has sounded negative but that is not the case. The 1.2 engine produces 60PS at 5,200rpm and 108Nm of torque at 3,000rpm and is absolutely brilliant at intermediate speeds. Simply put, if you want more, opt for a larger engine or the new TSI unit.

Sitting in the Volkswagen Polo's supportive front seats, the 3-cylinder engine could be mistaken for a diesel but it is also very easy to understand how the Volkswagen Polo gained the Car of the Year title. That might seem contradictory and it is no one thing that makes it stand out; it is more the complete package.

However, a special mention must be made about the handling, which is as relevant to everyday driving as it is to taking on a rally, forest stage. As well as being larger, the new Volkswagen Polo is also lighter and has a wider track, front and rear, which helps with the dynamics and stability. At the front, the strut-type suspension has been completely re-designed and the front wheels have been pushed forwards. The increase is only 5mm but together with the very rigid body, it aids directional stability and it feels nice and positive.

This feeling of confidence is helped by the speed-sensitive power steering and a slight caster action that has a self-centring effect, which helps by gently compensating for side winds and road cambers. This is a standard feature and, for the first time, so is ABS with Electronic Stabilisation Programme (ESP) and Hydraulic Brake Assist (HBA). The latter is because we simply don't brake enough in emergency situations, apparently and HBA can stop the car in around 25 per cent shorter distance.

On top of this, all Volkswagen Polos are fitted with Electronic Differential Lock and ASR Traction Control and, whilst on the subject of safety, there are side, head and thorax airbags for the driver and front passenger and the entry-level S has rear head restraints, which isn't always the case on other superminis. Front and rear curtain airbags are an optional extra, right across the board as is a front passenger's airbag, deactivation switch.

There are four trim levels available for the Volkswagen Polo : S, Moda, SE and SEL. Apart from the head-rests, the S also comes with height adjustment for the driver's seat and a rake- and reach-adjustable steering wheel. Electric front windows at the front (5-dr) and a folding rear seat back complete the practicalities, while music is provided through a CD/radio with MP3 compatibility and four speakers in the front of the cabin.

I should also point out that for the first time, the new Volkswagen Polo is offered with the option of Satellite-navigation, complete with touch-screen and integrated audio system, for £815.

Moda is said to be the trim for younger people and provides extra storage in the form of drawers under and pockets on the backs of the seats, heated and powered door mirrors front fog lights, a Multi-Device Interface (MDI) with USB and iPod connections, height adjustment for the front passenger's seat, tinted rear windows and chrome on the front grille. The Moda also benefits from asymmetric split and folding rear seat backs that allow a more flexible increase in load capacity from … well it doesn't say but it is large enough to carry six bags of shopping but not a child's buggy.

Both the Volkswagen Polo S and Moda are available as A/C versions, with the inclusion of Climatic semi-automatic air-conditioning, which is standard on the SE and SEL. The Moda and SE are very similar in terms of specification although some items have been swapped for others. For instance, the SE doesn't have the MDI or foglights but does have the air-con; but both share the same upgraded audio system with two extra speakers in the rear of the cabin.

Where the others had matt chrome surrounds to the air vents, the SEL has the shiny chrome along with a front centre armrest with storage, front foglights, MDI, leather trims to the gearshift and steering wheel, a tyre pressure monitor, a multifunctional computer, carpet mats and an alarm.