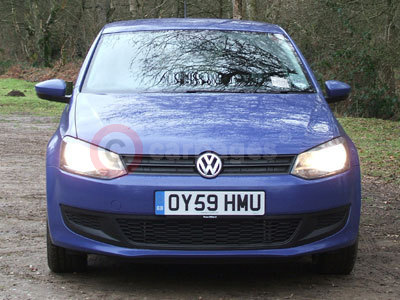 As you would expect from Volkswagen, the new Volkswagen Polo has been making an impression and gathering awards all over the place; but the crowning glory came in November, when the Volkswagen Polo was awarded the 2010 European Car of the Year, title.

Not bad for a car that is 35 years old. Even if it is in its fifth generation, the Volkswagen Polo is still true to the values and qualities that made it so popular back in 1975. At that time, it came with just one engine size: a 900cc engine producing just 40PS, although a slightly larger, 1.1(50PS) unit was added the following year. Originally, it was 3,505mm long; 1,562mm wide and stood 1,334mm tall and by 1979 Volkswagen had produced over 500,000 of them, proving the small but well-built formula, works.

By comparison, today's Volkswagen Polo is 3,970mm long, 1,682mm wide and 1,462mm tall; so over the years it has grown a little. Even better is that there is a greater choice of engine: three petrol and two diesel. The Volkswagen Polo test car housed the 3-cylinder, 1.2 engine with the lower of two outputs: 60- or 70PS. The other petrol option is the 1.4, 4-cylinder unit that produces 85PS, while the diesel is a 1.6-litre common-rail engine, which is new to the Volkswagen Polo, with two power outputs of 75- or 90PS.  In addition a 105PS, 1.2TSI (turbocharged) unit was recently added for people who like a bit of oomph. Also, the 3-door body style is now available, whereas it was just the 5-door at launch.

The Volkswagen Polo has many fine qualities but generally, it was never built for speed or with sporty intentions so it might surprise some to learn that the larger petrol engine can be mated to an optional 7-speed DSG automatic transmission in place of the standard, 5-speed manual 'box.

Rather than being overkill, the thinking behind including the DSG (Dual clutch) was to improve acceleration from standstill by lowering the first gear ratio and, at the other end of the scale; the ratio for seventh gear was changed to make it more like an overdrive gear. What is more, Volkswagen tells us that the original 6-speed DSG is used more suited to high-torque engines (up to 350Nm) and the one in the Volkswagen Polo works well with smaller engines that produce up to 250Nm.

Strangely, the vital statistics for this Direct Shift Gearbox configuration are the same as with the 5-speed manual transmission; a 0-62mph time of 11.9 seconds and a top speed of 110mph. There is a slight improvement in fuel consumption and CO2 emissions but the main difference comes in the smooth gear changes.

The Volkswagen Polo’s small, 1.2 engine is good for poodling around town but is lacking any 'spirit' under other circumstances. On the flat, it is fine but any incline calls for some cog-swapping, especially when there is more than one person on board. That said, the precise meshing and solid mechanical feel of the change is one of the things that make the Volkswagen Polo so nice to drive.

The excellent fuel consumption doesn't hurt either: 38.7mpg for the urban cycle, 62.8mpg for the extra-urban and 51.4mpg for the combined with emissions of 129g/km. However, until the BlueMotion version gets here, the diesel units are the most frugal in the range.

The Volkswagen Polo test car had a top speed of 98mph following a 0-62mph time of 16.1seconds, which is fairly leisurely. And while the maximum speed is above the legal limit there is very little left in the pots at motorway speeds for fast overtaking, so it requires changing down to third gear in order to find some 'go'.