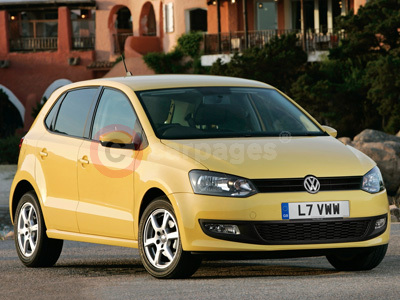 Volkswagen has announced prices for the new Volkswagen Polo model which is available to order now in UK Retailers. The first deliveries will take place on the car's official 'on sale' date of 16th October 2009. Prices start at £10,035 for the S 1.2-litre 60 PS five-door; the three-door model will be available in December 2009.

The new Volkswagen Polo, the fifth generation launched in the supermini's 34 year history, is the largest and most technically advanced, but it remains true to the brand's core values of safety, reliability, quality and value for money. Despite the increase in size, the Volkswagen Polo is lighter than the model it replaces leading to improved fuel economy and emissions.

At launch the new Volkswagen Polo is available with a choice of five engines, three petrol and two diesel. These are a pair of naturally-aspirated 1.2-litre engines with 60 or 70 PS and a 1.4-litre 85 PS; plus two 1.6-litre common rail TDI units producing 75 or 90 PS. All engines comply with Euro V emissions legislation. A new 1.2-litre 105 PS turbocharged TSI unit will be offered from early in 2010.

In a break from the previous Volkswagen Polo line-up, the new generation is offered in four different trim levels and an 'A/C' model is offered for those requiring climate control. The new range consists of S, Moda (which is designed to appeal to a younger audience) and SE, and SEL at the top of the range. GTI and BlueMotion models will follow later in 2010. All models offer a high level of standard specification including four airbags, ABS and, for the first time, ESP (Electronic Stabilisation Programme) on every Volkswagen Polo.

Optional equipment traditionally associated with cars in higher classes is also offered on the Volkswagen Polo. Touchscreen satellite navigation, a DAB digital radio and electronic climate control are all available.