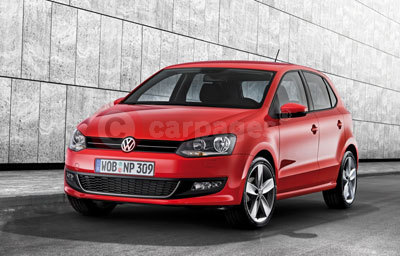 The fifth generation of Volkswagen’s evergreen supermini, the Polo, has been unveiled at the Geneva Motor Show, 34 years after the original went on sale in the UK.  It’s sharper, lighter, safer and more cutting edge than ever before and is set to establish new standards in the small car class.  Not only does the new Polo weigh 7.5 per cent less than the vehicle it replaces – despite being marginally wider and longer – but it’s also stronger, promises greater refinement and efficiency and features new packaging to make it the most versatile iteration yet.

The stylish Volkswagen Polo debuts a new look as well as highly efficient TSI and common rail TDI engines to set new benchmarks in efficiency – bettering even the high standards set by the outgoing car.  In addition, advanced safety systems and an all-new construction allow it to meet the criteria for the recently introduced five-star EuroNCAP standard.

Styled by a team led by Walter de Silva (Head of Design, Volkswagen Group) the fifth generation Polo establishes a distinctive new look for the car that draws on the design direction established by the Scirocco and Golf.

Clean, uncluttered lines mix with a thin, horizontal grille element framed by a set of sleek light units.  The use of horizontal lines in the grille and lights allows the Polo to appear lower and wider than it really is.  The simple design approach continues to the back of the car, which features a set of distinctive new rear lights and a wider track (1,464 mm front, 1,456 mm rear) to underline the impression of solidity.

These slightly larger dimensions and a longer wheelbase mean there’s greater space inside the new Polo.  Head, shoulder and legroom have all increased, as has the load volume which now totals a minimum of 280 litres and a maximum of 952 litres.  Up front, elegant white backlit dials are set into a dashboard constructed out of high-quality, soft touch plastics.  Volkswagen’s renowned attention to detail remains apparent in the new Polo with subtle aluminium highlights dotted around the interior and the option of a handy air conditioned glovebox and an easily accessed connection point for an MP3 player.  In addition, and for the first time on a Polo, the RNS 310 touchscreen satellite navigation system can be specified along with a three-spoke, multifunction steering wheel.

Continuing the programme of efficiency improvements established by Volkswagen, the new Polo is powered by a mix of advanced naturally aspirated 1.2- and 1.4-litre engines as well as a new turbocharged 1.2-litre TSI petrol unit joining another all-new 1.6-litre TDI common rail diesel engine.  All are equipped with either five- or six-speed manual gearboxes as standard and, for the first time on the Polo, selected variants can be specified with Volkswagen’s advanced and lightweight seven-speed DSG gearbox.

A Polo BlueMotion model will also join the range shortly after launch.  Powered by a highly efficient 1.6-litre 90 PS TDI common rail diesel engine and linked to a five-speed gearbox with lengthened ratios in third, fourth and fifth, the new BlueMotion achieves 74 mpg while emitting just 96 g/km of CO2 – bettering the outgoing Polo BlueMotion model which is itself one of the most fuel efficient vehicles currently on sale.

The gains in efficiency don’t stop there: in 2010 the second generation BlueMotion will follow.  Shown as a concept car at Geneva, and equipped with an all-new 1.2-litre three-cylinder common rail diesel engine developing 75 PS, the BlueMotion II will be capable of returning 85 mpg on the combined cycle while generating just 87 g/km of CO2.  Making this possible is a package of modifications including the new engine, automatic Stop-Start and regenerative braking, a gearbox with revised ratios, optimised aerodynamics beneath the vehicle, suspension lowered by 15 mm and the fitment of low rolling resistance tyres.

The new Polo features a comprehensive roster of standard safety equipment including for the first time on all models four airbags, anti-lock brakes, Electronic Stabilisation Programme (ESP) and ISOFIX anchor points all fitted as standard.

Production of the new Polo for the UK market starts this summer before first deliveries take place in October.  Prices will be announced nearer this time.