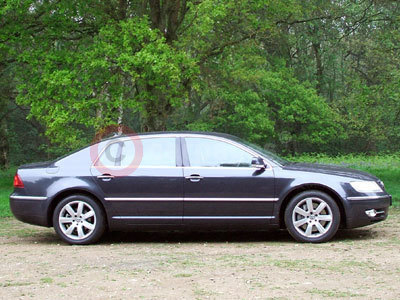 The Volkswagen Phaeton comes in two forms; Standard and Long Wheelbase and with two engines. The smaller, 3.0 V6 TDI, is available in both lengths and the massive, 6.0 W12 petrol engine is only available as a LWB version. Either way, they have both had exterior refreshment in the form of a new front grille with a 3D VW badge in chrome, which is flanked by Xenon headlights or bi-xenon in the W12 car, and a new range of colours and paint finishes.

From the side, the Volkswagen Phaeton is the epitome of classic styling, which is made to appear all the more sleek by the chrome rubbing strip that runs the full length of the car, with breaks for the wheelarches. If the standard version at just over 5-metres in length looks sleek and sophisticated, the LWB, which has an extra 120mm wheelbase, giving it a prestigious appearance worthy of the title 'limousine'.

At the rear, the chrome trim continues around the deep bumper that integrates seamlessly into the rear wings. The Volkswagen Phaeton's twin circular taillights are illuminated by LEDs and are very distinctive, especially at night, while the boot itself is uncomplicated and features little more than the Phaeton logo and VW emblem. The badge is more than a symbol, a finger brushed over the base of the integrated V and W, releases the boot lid and on cars with automatic boot opening (W12), the boot lid rises smoothly to reveal a cavernous luggage space with a capacity of 500-litres.

We tested the LWB version of the Volkswagen Phaeton, where cavernous also describes the amount of space in the rear of the cabin. Legroom is clearly not a problem and with the extra 120mm in length, comes increased comfort features such as sunblinds for the windows and rear windscreen. The latter is electrically operated and rear occupants also have control over their section of the 4Zone climate control, which means individual settings for both rear seat areas. With an exterior width of 1.9-metres, there is plenty of room and a seatbelt for a third rear passenger but it spoils the image, somewhat.

Volkswagen Phaeton Images may not be UK specification cars. Colours and exterior and/or interior elements may differ from actual models.