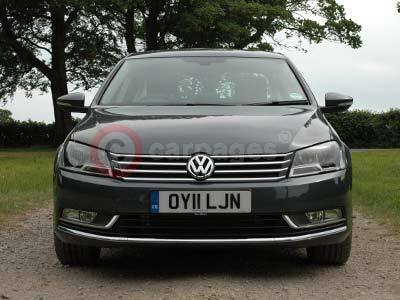 Every panel - with the exception of the roof - and glass surface is new for the seventh generation Volkswagen Passat and is designed to bring it in-line with the 'Volkswagen design DNA', which sees the recognisable front-end design as seen across Volkswagen's range.

Road dominance is achieved courtesy of a new front-end design with squared-off headlights and LED daytime running lights - Bi-Xenon headlights are an optional extra. The body-coloured bumper features a chrome-highlighted air intake and integrated fog lights. Volkswagen Passat SE models and above are also equipped with chrome trim features on the front splitter and window surrounds.
Sharing a similar design to that of the Volkswagen Jetta and Phaeton, is a V-shaped bonnet, also adding to the dominance portrayed by the Passat. The side profile's sweeping line draws the eye from roof section to the rear of the car, where the wedge-like shape of the past is gone, replaced by a lighter, wider and lower rear. Rear light clusters now wrap around the rear haunches of the car and the bottom of the bumper now sports a chrome strip, centrally split by the rear number plate.

The interior sees new seats, door trim and accent materials, alongside a redesigned centre console and dashboard. The upper section of the dash has a new surface texture and chrome surrounds for the air vents. The centre console has been redesigned around driver ergonomics, with all controls within easy and intuitive reach. The upper level is crowned with an analogue clock, which looks a little like an afterthought for token luxury, under which are the infotainment systems and controls for the air conditioning or climate control systems, depending on specification.

The diesel range for the Volkswagen Passat are now all badged with BlueMotion, a technology with battery regeneration and Stop/Start systems included as standard. As such, the entry-level 1.6 litre TDI 105 PS engine for example, achieves a combined fuel economy figure of 68.8 mpg and CO2 emissions of 109g/km. Across the range, direct injection petrol and diesel engines offer a power range between 105 to 170PS. The petrol range features a 1.4-litre 122 PS; a 1.8-litre 160 PS; and a 2.0-litre 210 PS. The three common rail diesels are a 1.6-litre with 105 PS and a 2.0-litre TDI available in either 140 or 170 PS outputs.