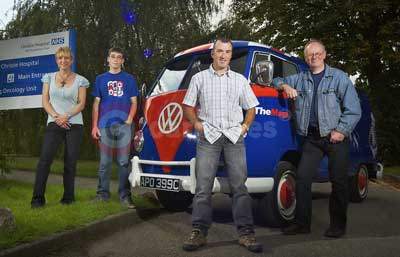 The Teenage Cancer Trust recently handed over the keys to a unique The Who ‘Magic Bus’ – a 1965 ‘split-screen’ Volkswagen Transporter van donated by Volkswagen Commercial Vehicles – to Anthony Jones from Irlam in Manchester.

Anthony is the lucky winner of a competition that raised over £32,000 for the charity.  He was selected at random from a total of 8,878 entrants from around the world.

The competition attracted an overwhelming majority of entries from the UK (5,728), a large number from the USA and Germany (988 and 916 respectively), as well as entries from Switzerland, Canada, Spain and France.

The Magic Bus is specially branded with The Who’s famous target logo and iconic images of the original four band members, including Keith Moon and John Entwistle, designed by The Who’s art director Richard Evans, who has been working with the band for more then 30 years and has created several outstanding album covers as well as Tour Designs.  The sun visors have been autographed by Roger Daltrey and Pete Townshend.

Anthony Jones, a construction worker from Irlam, Manchester said, ‘I couldn't believe it when I got the phone call to say I had won the Magic Bus - I was absolutely ecstatic!  I’m a massive fan of The Who and it's such an amazing van, I will treasure it.  Thank you to Volkswagen Commercial Vehicles and Teenage Cancer Trust, you've made me a very happy man!’

Simon Davies, Chief Executive of Teenage Cancer Trust commented: ‘This van really has become a Magic Bus.  The money raised from the competition will make such a difference to the many thousands of teenagers and young people diagnosed with cancer every year, enabling us to build more units for them in NHS hospitals.  We are very grateful to Volkswagen Commercial Vehicles and to The Who for their contribution to this wonderful campaign.’

Anthony was presented with the Magic Bus outside Teenage Cancer Trust’s unit at the Christie Hospital, Manchester by Heather Burns-Mace, Head of Regional Fundraising, Teenage Cancer Trust, along with Richard Evans, The Who’s art director, Anthony’s son, Chay, and a patient from the unit, Jake McDevitt.

The second prize in the competition – a copy of ‘Rock Band’, an interactive computer game from Electronic Arts – went to Thorsten Wasmus from Hanover, the home of Volkswagen Commercial Vehicles and where the Magic Bus was produced.