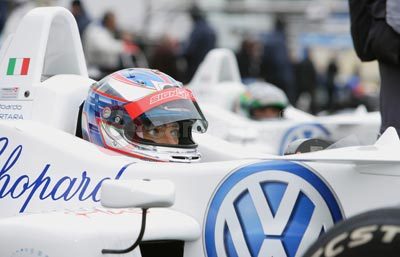 Eighteen years after last taking victory in the World's most prestigious Formula 3 race, the Macau Grand Prix, Volkswagen returns to the Chinese province on the weekend of 15th and 16th November 2008 with five talented young drivers all keen to follow in the wheeltracks of the team's last winner - Michael Schumacher.

Schumacher's 1990 Volkswagen-powered Macau victory was his first major international win, and it helped set him on the path to a Formula 1 drive the following season and seven World Championships. Edoardo Mortara from Italy, Mika Maki from Finland, the Chinese driver Congfu Cheng, Laurens Vanthoor from Belgium and Nicola de Marco from Italy are the drivers hoping to follow Schumacher's example in the Volkswagen Dallara F308 next weekend.

"Three wins in the Formula 3 Euro Series and two in the German Formula 3 Cup are a very good year-end tally for the two-litre engine from the Volkswagen Group,' says Volkswagen Motorsport Director Kris Nissen. "To end the season, Volkswagen returns to the most famous Formula 3 race of all, the Macau Grand Prix, where the best young drivers will meet to match their skills on the world's most difficult city street circuit. The track demands a powerful engine with good driveability; at the same time, driving skills are more important in Macau than on most other race tracks."

Ayrton Senna, David Coulthard, Michael and Ralf Schumacher - the list of famous names to have contested the tradition-steeped event in the former Portuguese colony is long. "Macau is a true classic. This race is to Formula 3 what Monaco is to Formula 1. Everyone dreams of victory, because you can really make a name for yourself by winning there, and that's what I'm hoping to do," says Edoardo Mortara, runner-up in the Formula 3 Euro Series with Volkswagen this year.

The 21-year-old Signature team driver already knows the 6km circuit: "In some places the circuit is extremely narrow and full of bends so that brushing the guard rails is almost inevitable. On the other hand, there are parts which are wide and incredibly fast. It takes a lot of courage, this mix is really unique. "The Signature team is entering two further Volkswagen Dallara F308 cars for Red Bull Junior Mika Maki as well as for Congfu Cheng in the race. "Competing with Volkswagen and Signature in Macau is fantastic," says 'Franky' Cheng. "This is a home race for me, although the circuit is new for me as well as for the team."