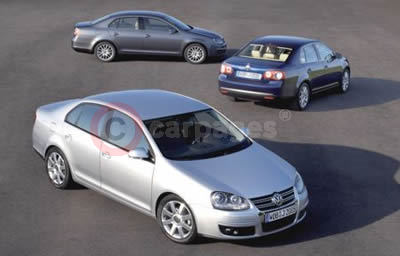 Volkswagen has released the first pictures of the Jetta, which will be launched in Germany on 3 June and in the UK at the start of 2006. The newcomer replaces the Bora, and signals the revival of the Jetta name in Europe. By introducing a worldwide, uniform name for its compact saloon, Volkswagen decided to adopt the one already used in the USA, where the Jetta is not only the company’s best-selling car, but also the top-selling European car outright.

The luggage area has also increased in size, now offering a generous 527 litres of space – 72 litres more than the Bora. For extra flexibility, the 60/40 split rear back-rest can be folded forwards to form an almost flat floor up to the front seats.

The Jetta will be offered to UK customers from launch with a choice of five engines - three petrol and two diesel. These comprise a 1.6-litre FSI 115 PS; 2.0-litre FSI 150 PS; 2.0-litre T-FSI 200 PS; 1.9-litre TDI 105 PS; and a 2.0-litre TDI 140 PS. Both diesel engines will be available with Volkswagen’s pioneering DSG (Direct Shift Gearbox) system. As with other recent Volkswagens, the Jetta will feature multi-link rear suspension and electro-mechanical power steering for appealing dynamic characteristics.

Standard specification and pricing will be finalised closer to the Jetta’s UK on-sale date, but the car is likely to offer strong value for money and a comprehensive equipment list.

Over 6.5 million of the Jetta’s predecessors have been sold worldwide to date, and the newcomer looks set to continue that success.