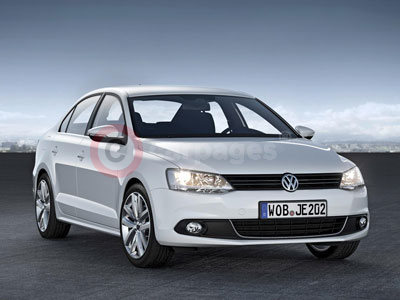 Following its international unveil earlier this year in Times Square, New York, the latest generation Volkswagen Jetta has made its European debut at an event held at the home of FC Bayern Munich, the Allianz Arena.

Every panel you can touch, both inside and out is new to the Volkswagen Jetta. At the front, a grille similar to the new Volkswagen Phaeton features strong horizontal fins creating the impression that the vehicle is lower and wider than it actually is. The clean, simple lines are complemented with intricately styled light units both at the front and rear.

Styling changes continue inside the cabin bringing the design in line with the Volkswagen Golf with a new centre console, entertainment and climate control systems and steering wheel design among the updates. In addition, the new Volkswagen Jetta has grown in length by 90 mm to measure 4,644 mm with its wheelbase extended by 70 mm to 2,648 mm. The result is a 67 mm increase in rear legroom over the outgoing car.

The sixth generation of the Volkswagen Jetta offers greater efficiency and fewer emissions with a range of advanced petrol and diesel forced induction engines. The range includes a pair of 1.4-litre TSI engines, developing 122 PS and 160 PS, and two diesel engines with a 1.6-litre TDI 105 PS and a 2.0-litre TDI developing 140 PS. The 1.6-litre TDI unit will feature BlueMotion Technology modifications including Stop/Start and battery regeneration.

As with the outgoing Volkswagen Jetta, the new car combines the practicality of being able to seat five adults with a large, 510 litre loadspace and a comprehensive range of standard safety features including six airbags, ABS and Electronic Stabilisation Programme (ESP).

Sales of the new Volkswagen Jetta in the UK will commence in early 2011 with prices and specifications being announced nearer this time.