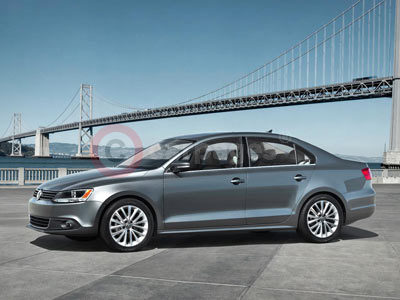 The new Volkswagen Jetta has been unveiled at Times Square in New York, featuring a sharp new look, greater space and the most advanced range of petrol and diesel engines yet.

The fresh styling and acute attention to detail continues inside the Volkswagen Jetta. An all-new dashboard featuring subtle aluminium highlights sits ahead of a leather-trimmed three-spoke steering wheel. Every Volkswagen Jetta will feature an integrated multifunction display, air conditioning and a CD stereo system. Available as an option will be touchscreen satellite navigation.

As with the outgoing Volkswagen Jetta, the new car mixes the practicality of being able to seat five adults with a large, 510 litre loadspace and a comprehensive range of standard safety features including six airbags, ABS and Electronic Stabilisation Programme (ESP).

The overall length of the Volkswagen Jetta has grown by 90 mm to measure 4,644 mm. In addition, the wheelbase has also been extended to 2,648 mm, an increase of 70 mm, resulting in 67 mm greater legroom for rear seat passengers.

Powering the new Volkswagen Jetta is a range of advanced petrol and diesel forced induction engines. New to the Volkswagen Jetta is the 1.2-litre TSI engine producing 105 PS while the twincharged 1.4-litre TSI 160 PS engine mixing performance and economy is added to the range. The 1.4-litre TSI 122 PS and 2.0-litre TSI 200 PS continue unchanged. Diesel options consist of a 1.6-litre TDI 105 PS and a 2.0-litre TDI 140 PS engine.

BlueMotion Technology modifications including Start/Stop and battery regeneration will be made available linked to the 1.2-litre TSI and the 1.6-litreTDI engines. The changes allow the 1.2-litre TSI version to achieve 53.2 mpg on the combined cycle while emitting 123 g/km of CO2. The 1.6-litre TDI variant is capable of returning 68 mpg and emits just 109 g/km of carbon dioxide.

The original Volkswagen Jetta was launched in Germany in 1979 with over 9.6 million vehicles sold with the nameplate since then.

Sustained popularity in the US market has led the Volkswagen Jetta to become the biggest selling German saloon car in North America where it accounts for 110,000 sales every year.

Sales of the new Volkswagen Jetta in the UK will commence in early 2011 with prices and specifications being announced nearer this time.