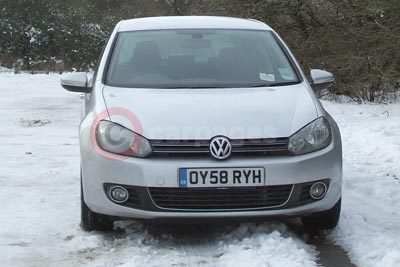 If you have celebrated a 34th birthday recently, consider this; you are as old as the Volkswagen Golf.

First launched in 1974, the latest Volkswagen Golf is the sixth generation - its longevity, a testament to its popularity. Furthermore, Volkswagen tells us that it is Europe's best-selling car and the best-selling Volkswagen in the UK. It is here that sales of the new MkVI are expected to be in the region of 55,000 for 2009, most of which will be the 5-door version, although the current recession may curb that figure somewhat.

So, what is new? Strangely, the new Volkswagen Golf appears smaller than its predecessor and, to a certain extent, it is. However, being 5mm shorter and sitting 34mm lower, is neither here nor there as the wheelbase, headroom and luggage capacity remain the same. The interior space has increased a little as the new car is 27mm wider than the old one.

The new Volkswagen family look, established by the Scirocco, has been extended to the new Golf with a design emphasis that has moved away from the heavy vertical look and now leans towards horizontal elements. This can be seen in the bold but shallow, gloss-black front grille, flanked by new headlights, while below, the front air dam echoes the same shape. Volkswagen like to pay attention to detail, an example is the small VW logo on the outer edge of the dipped beam lenses and, more practically, a small groove on the door mirror housings that channel water away from the glass.

Towards the rear, the traditional heavy C-pillars remain but have been re-designed, while the rear windscreen is set lower, but has a larger area for better rearward visibility. The rear light clusters are narrower than the previous model and have a hint of Touareg about them. In between, the Volkswagen logo acts as a boot-lid handle, which is not new but the Golf badge is now in an italic face, which is.

Although it looks less bulky than the previous model, the new Volkswagen Golf is not going to set the world on fire or pulses racing; but then, it isn't mean to. The Volkswagen Golf is, and has always been, a well considered and well constructed workhorse. Undoubtedly, these features together with an element of style, is what makes it a standalone car; hence the television advertisement slogan: "Sometimes, the only one you have to beat is yourself." Justifiable arrogance, I would say.