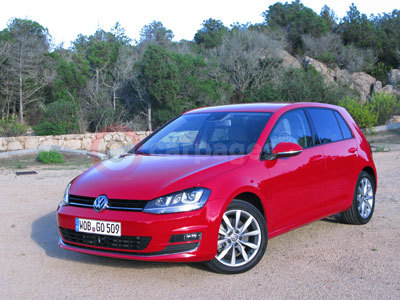 The arrival of a new Volkswagen Golf is a big event. New on the scene for 2013 is the seventh generation of a car that has achieved iconic status over the past six generations. It is nearly four decades since the original Golf, now known as the Mark 1, made its debut in 1974. Since then more than 29 million Golfs have been sold around the world, and it has become a benchmark against which other similar sized cars tend to be judged. British motorists love the Golf, and have bought more than 1.6 million of them over the years. So it looks pretty certain that the new one will quickly become a familiar sight on the roads here.

Over the years, successive generations of the Golf have grown bigger, plumper and heavier. The new one is no exception with its expanded external dimensions. It measures 56 mm longer and 13 mm wider than its immediate predecessor, and has a 59 mm longer wheelbase. But it sits 28 mm lower and the wheels are pushed out slightly nearer to the corners. There has also been a reversal of what Volkswagen admits was a "weight spiral” for the Golf over the years. That has now been reversed, with up to 100 kg shaved off the new car’s weight. These dietary measures include a body structure that is 23 kg lighter, but is actually stronger as a result of design changes. New engines and lower weight mean that the Golf’s fuel economy has been improved by some 23 per cent.

The new Golf comes with a range of engines that includes 1.2 litre TSI petrol units with 84 bhp and 104 bhp power outputs, and 1.4 litre TSI petrol with 121 or 138 bhp. The more powerful 1.4 litre TSI has Active Cylinder Technology, with the ability to deactivate two cylinders when the engine has less work to do. The diesels are 1.6 TDI 104 bhp and two-litre TDI 148 bhp. All versions of both petrol and diesel Golfs have standard stop/start and battery regeneration. Gearboxes are five or six-speed manuals and six or seven-speed DSG autos. From January 2013 there are both three and five-door body styles, and three trim levels: S, SE and GT. GTI and BlueMotion models join the range from later in 2013. Prices start from £16,285 and rise to £24,880 at the top end of the new Golf range.

Described by one magazine as “All the car you’ll ever need”, the new Golf range has lots of models to choose from. The two-litre diesel version we tested is a four-cylinder, 16-valve unit, teamed with a six-speed manual gearbox. It has strong performance with a 134 mph top speed and acceleration from zero to 62 mph in 8.6 seconds. The combined average fuel economy figure is 68.9 mpg and CO2 emissions of 106 g/km qualify it for a low-cost VED tax disc in band B. The engine’s power output is 148 bhp peaking at between 3,500 and 4,000 rpm, and its maximum torque is 236 lb ft at 1,750 to 3,000 rpm.

This is a 7-year+ news article, from our Volkswagen archive, which dates back to the year 2000.

If in doubt check with your local Volkswagen dealer as car prices and technical data will have changed since 2013.