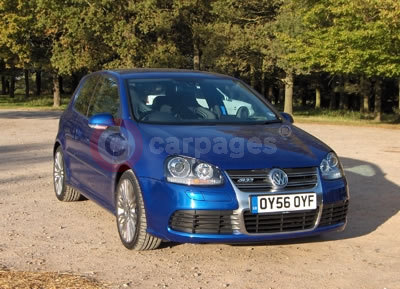 For many years, the Golf GTi (launched in 1976) was at the top of Volkswagen's 'hot-hatch' bill. But in 2002, a new contender took the crown, the R32 and now, the second generation is even better.

The R32 comes as a 3 or 5-door hatch with 4MOTION, intelligent four-wheel-drive system and a choice of 6-speed manual gearbox or the clever, 6-speed DSG automatic transmission.

Whatever, the chosen configuration, the R32 will house the 3.2-litre, V6 petrol engine used throughout the Volkswagen Group, most notably in the Audi TT. The engine is mounted at the front and produces 250PS (246.6bhp) at 6,300rpm and maximum torque of 320Nm or 236lb ft, kicks in at 2,800rpm and continues through the rev range.

The test car was a 3-door model with the DSG 'box - apparently this is the first time DSG has been mated to a petrol V6 engine. The DSG or direct-shift gearbox is, effectively two gearboxes in one. It has two wet clutches; one controls the odd gears and reverse, while the other controls the even gears. The Mechatronic (hydraulic and electronic) gearbox control system engages the next higher gear but holds it on standby until the optimum shift point is reached and the higher gear becomes fully engaged. This shift takes place in less than four hundredths of a second.

The DSG box in the R32 also has a tiptronic function for manual changes. This is accessed by pushing the lever across from the 'D' position and then forwards and backwards for higher and lower gears. Alternatively, the driver can use the steering column mounted paddles.