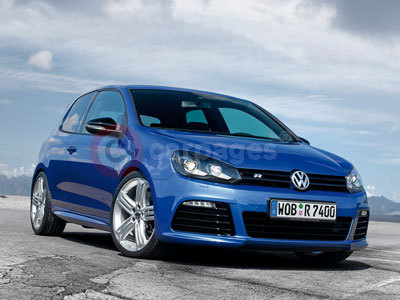 Not only is the new engine 35 kg lighter and 20 PS more powerful than the 3.2-litre V6 found in the outgoing Volkswagen Golf R32, it's also more efficient. Economy rises from a combined 26.4 mpg to 33.2 mpg while CO2 emissions fall from 257 g/km to 199 g/km. Despite the gains in efficiency the Volkswagen Golf R is faster and sharper than ever - the new car can accelerate from rest to 62 mph in just 5.7 seconds. Equipped with a six-speed DSG gearbox, this figure falls to 5.5 seconds while top speed is limited to 155 mph.

The 1,984 cc, four-cylinder EA113 engine (as opposed to the EA888 fitted to the current Volkswagen Golf GTI) is derived from the Mk V Volkswagen Golf GTI. To extract the extra power the block has been reinforced with an entirely new alloy head, uprated pistons, conrods and high pressure injectors. An uprated turbocharger generating 1.2 bar of boost is joined by a new intercooler to cope with the extra heat generated. The result is 270 PS developed at 6,000 rpm and 258 lbs ft of torque at 2,500 rpm.

New 345 mm diameter front brake discs (rear: 310 mm) and callipers are joined by uprated suspension that's been lowered by 25 mm with revised spring and damper rates and new anti-roll bars. The Electronic Stabilisation Programme (ESP) has also been revised for the Volkswagen Golf R with two stages designed for track use. Finally, the electro-mechanical power steering system has been tweaked to sharpen responses.

Unlike the four-wheel drive system fitted to the Volkswagen Golf R32 that relied on differing wheel speeds between the front and rear axles to engage the four-wheel drive, the system fitted to the Volkswagen Golf R uses a pre-charged hydraulic system that's able to react more quickly while also limiting the torque being channelled through either axle to reduce wheelspin. In extreme cases up to 100 per cent of the torque can be channelled to the rear wheels if required.

To set the Volkswagen Golf R apart from a conventional Volkswagen Golf or GTI it's fitted with new front and rear bumpers complete with LED running lights at the front and a gloss black diffuser at the rear housing a pair of central exit exhausts. A set of Xenon headlights and a new black grille and wing mirrors extend back to a set of sill extensions framed by 18-inch five-spoke wheels complete with 225/40 tyres as standard - 19-inch wheels with 235/35 tyres are optional. At the back, unique rear light units lend the Volkswagen Golf R an aggressive look - the high-intensity LED bulbs hidden behind smoked lenses.

The changes continue inside the Volkswagen Golf R - a set of distinctive aluminium 'R' kick plates are joined by new seats finished in grey Alcantara contrasted against high-grip black mesh cloth. Gloss black highlights throughout the interior are complemented by the subtle, electric blue needles in the revised instrument column.

The new Volkswagen Golf R is set to arrive in the UK in December 2009 with prices and specifications due to be announced nearer this time.