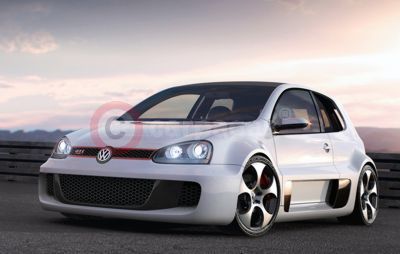 The Volkswagen Golf GTI W12 concept is set to make its UK debut at the GTI International show, an independently organised event which will be held over the weekend of 16/17 June at Bruntingthorpe proving ground in Leicestershire. Marking the 30 th anniversary of the GTI’s arrival in the UK, the GTI W12 – the most powerful Golf every produced by Volkswagen – will be seen for the first time since its unveiling at a GTI enthusiast event in Austria last month.

The GTI W12-650 is powered by a bi-turbo W12 engine developing 650 PS – a full 450 PS increase over the standard Golf GTI. Unlike the standard car the W12-powered GTI channels its drive through its rear wheels via a six-speed Tiptronic gearbox.

Keeping the GTI W12 stable at high speeds are sophisticated under body aerodynamics linked to a carbon fibre roof incorporating a scoop on its trailing edge to feed air into the mid-mounted engine. The GTI W12 features a floating C-pillar to allow the rear windows to sweep inwards and channel airflow into the radiators.

The GTI International gathering is celebrating its 20 th anniversary with an estimated 20,000 fans set to attend in a diverse range of GTI models from across the five generations. Journalists will have the opportunity to join the fans and set a time up the quarter mile sprint in the latest 230 PS Golf GTI Edition 30 or the range-topping Golf R32. Joining the Golf GTI W12 on display will be examples of historic Volkswagens, race cars and the GTI-rivalling Sportline Transporter vans. Unique approved Volkswagen accessories will also make their debut at the event.