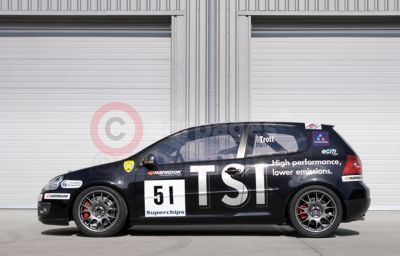 Britain’s Volkswagen Racing Cup will be the stage for a motorsport world debut this season when a Golf GT equipped with the pioneering TSI supercharged and turbocharged engine takes to the track.

In road-going form the Golf GT’s 1.4-litre, 16-valve engine produces 170 PS but the engineers at Volkswagen Racing UK, with the help of their technology partners at Superchips, Milltek Sport and Turbo Dynamics, have already boosted this to 230 PS and believe there is further power to come.

The Golf GT TSI is scheduled to make its maiden appearance in the Hankook-backed championship’s opening rounds at Oulton Park in Cheshire on Easter Monday(April 9).  It will be driven at Oulton by freelance motoring journalist, Nick Trott.

‘We are pulling out all the stops to get the Golf to Oulton,’ said Volkswagen Racing UK Director Sam Roach.  ‘It’s been a major technological exercise to prepare this sophisticated power unit for racing and our partners have provided massive support and expertise.  To be able to extract 230 PS from a 1.4-litre engine is a major achievement.’

It’s not the first time that Volkswagen Racing UK has led the world in this way: in 2002 the team drove a turbodiesel into victory lane, establishing a UK first, and in recent seasons has given the new Golf GTI and Polo GTI their world racing debuts.

The Golf GT TSI is the most ambitious project the team has yet undertaken.  The TSI features an engine-driven supercharger and an exhaust gas turbocharger, arranged in series; the supercharger operates at lower engine speeds and the turbo cuts in as revs rise.  The result is excellent driveability and performance throughout the rev range, with no turbo lag and high maximum torque.  The power unit was named Best New Engine of 2006 in the International Engine of the Year Awards.

Trott, 32, is excited by the prospect of giving the GT TSI its world motorsport debut: ‘The power to weight ratio is excellent and the package promises a lot – I only hope I can do the car justice!’

The Volkswagen Racing Cup is the perfect showcase for the innovative new racer.  It’s the sole saloon car supporting event to the prestigious British Formula 3 and British GT Championships and features 12 races at six weekend events on the UK’s top circuits.  All races are televised on the Sky Sport channel.