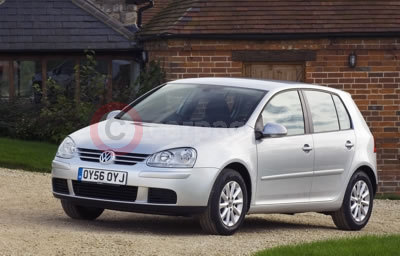 The sustained popularity of the Volkswagen Golf shows no sign of abating as judges at What Car? magazine awarded it the title of Best Small Family Car.  The award, presented at a prestigious ceremony at the London Grosvenor House Hotel on January 18, continues the remarkable success of the fifth generation Golf which won the overall Car of the Year award shortly after its launch in 2004.

Judges singled out the new Golf Match for particular praise.  Steve Fowler, Group Editor of What Car? commented: ‘The Golf has always been a classy contender.  This year, it found the final piece of a winning jigsaw.’

The Match replaced the SE model late last year to become the most popular Golf among buyers.  It delivers desirable equipment such as an iPod link, colour-coded bumpers, a leather multifunction steering wheel and unique 15-inch alloy wheels.  Despite these gains the price fell by £380 when compared with the outgoing SE model.  Combined with the additional equipment this translates to £1,100 of extra value for the customer.

The Golf’s accolade was just one of a trio of awards secured by Volkswagen- the most achieved by any single manufacturer at the 2007 event.  The Best Family Car award went to the Passat for the second year in a row.  A firm favourite with the What Car? judges the Passat has recently gained a new performance diesel in the form of the new 2.0-litre TDI 170 PS model, producing a substantial 258 lbs ft of torque.

In awarding the Passat the title Steve Fowler said: ‘The Passat is in a league of its own and keeps the flag flying high for the conventional saloon.  For starters, its desirable image does more than just set the right tone in the company car park.  It also helps keep residual values higher than many rivals’ which is good to know if you’re buying the car with your own money, rather than your company’s.’

Rounding off the triple success for Volkswagen the four-seater Eos coupé cabriolet scooped the hard-fought Best Open-Top Car award on its debut in front of the What Car? judges.  Combining the virtues of both a hard top coupé and convertible through the use of a sophisticated folding mechanism complete with a sliding glass sunroof the Eos is unique in its class and has proved to be a hit with the judges at What Car? and UK buyers alike.

Steve Fowler commented on the decision: ‘Volkswagen has watched what the other manufacturers have been up to in the coupé-cabrio sector, then it has gone out and built a car that betters the lot of them.  The Eos is a cracking car to buy, and it’ll be a hoot to own.  What more can you ask for?’

Paul Willis, Director of Volkswagen UK said: ‘We are delighted and particularly proud that the Eos has won on its debut.  For the Golf and Passat to have maintained their popularity with the judges to win their classes is also a tremendous achievement.’