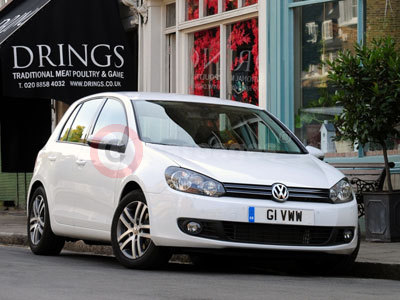 Following the launch of the standard sixth generation Volkswagen Golf and the GTI and GTD performance models, Volkswagen is pleased to announce the 'economy' range, based on a new 1.6-litre common rail diesel engine, and which includes a BlueMotion variant.

All the new Volkswagen Golf models with this engine and five-speed manual gearbox achieve CO2 emissions of under 120 g/km, while the new Golf BlueMotion, the most efficient and technologically advanced iteration of the model yet produced, is capable of achieving 68.9 mpg on the combined cycle which equates to a theoretical range of over 800 miles, while emitting just 107 g/km of CO2.

Three versions of the 1.6-litre TDI engine are available to order. The first is an entry-level 90 PS - offered in S trim only - which returns 62.8 mpg on the combined cycle while producing 118 g/km of carbon dioxide. The second has more power at 105 PS and is available in S and SE trim. This has a combined economy figure of 62.8 mpg and a CO2 output of 119 g/km. This engine is also available with a seven-speed DSG automatic gearbox.

The third is the 105 PS in BlueMotion guise. This label is now well known as denoting the most efficient and least polluting model in Volkswagen's range. Although it uses the same basic powerplant as the other new Volkswagen Golfs, the BlueMotion variant has significantly enhanced economy and carbon dioxide figures: 68.9 mpg and 107 g/km.

The gains in efficiency are made possible through a combination of subtle yet effective changes to the Volkswagen Golf's drivetrain and aerodynamics. The engine's five-speed gearbox has longer ratios in third, fourth and fifth gears as well as regenerative braking.

A Stop-Start system is also fitted to the new Volkswagen Golf BlueMotion to improve efficiency further. The system allows the engine to shut down completely when at a standstill before automatically restarting as soon as the driver is ready to move off.

As with all BlueMotion variants, the new Volkswagen Golf features optimised aerodynamics with front-mounted cooling ducts moved to the underside of the vehicle, a ride height lowered by 15 mm and low rolling resistance tyres.

The gains in efficiency do not come at the expense of equipment or safety. The Volkswagen Golf BlueMotion is based on the SE model and as such is fitted with seven airbags, ABS, Electronic Stabilisation Programme, Climatic air conditioning, rain sensors, automatic lights, an iPod compatible CD stereo with eight speakers and cruise control.

All the models detailed here can be ordered now for imminent delivery. BlueMotion models are due to arrive in the UK in September 2009. The 2.0-litre TDI 110 PS engine is no longer available to order in the Volkswagen Golf.

A second phase of Golf BlueMotion models will be introduced at the end of 2009 based on the entry-level S model. These cars are expected to have a CO2 output of 99 g/km and a combined economy figure of over 75 mpg.