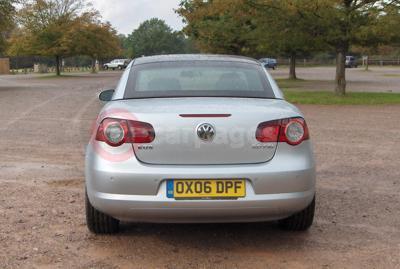 The FSI engine, in combination with the 6-speed manual 'box makes for flexible performance and drives more like a diesel than a petrol car. However, while the fuel consumption figures of 24.8mpg, 43.5mpg and 34.0mpg for the urban, extra-urban and combined respectively, are reasonable the diesel unit will obviously offer the most frugality with a combined figure of 47.1mpg.

Once settled in the comfy sports seats, it really doesn't matter. It's a Volkswagen and you expect it to feel safe and solid but there seems to be that little bit extra - a sense of refinement over and above the normal call of duty. The two rear seats are snug but with enough legroom for the average adult.

It has to be said that the plain, ergonomically sound, fascia is not going to set any pulses racing even when it has the DVD Sat-Nav/audio system screen in the centre. Prices for this start at £1,400 and include iPod preparation or USB post, or a 6-CD autochanger and multifunction computer hidden under the front armrest. There are other audio systems and configurations available, too.

As with all convertibles, the body has to be strengthened to compensate for the lack of rigidity the roof normally provides. The Eos is no different and the designers and engineers have done such a good job in beefing up the torsional rigidity that there is very little scuttle-shake even on very bumpy road surfaces.

Safety is paramount, especially when the occupants are exposed to the elements. While the Eos has not yet undergone the EuroNCAP tests, Volkswagen tells us that not only does the car pass all European safety standards but all the world-wide regulations, too.

In the event of the car rolling over, two supports pop up from behind the rear headrests. They take just 0.25 seconds to deploy offering protection in combination with the strengthened windscreen frame. Side protection comes in the form of curtain airbags that cover the whole of the side window area, front and back. And, of course, there are front airbags for the passenger and driver.

All of these safety features are standard as is ESP and HBA or Hydraulic Brake Assist. The ESP system includes ABS with EBD, ASR traction control and EDL Electronic Differential Lock. There is also an Adaptive Management Model or AEM system that constantly monitors for any instabilities so that it can act against them.

The best part about the Volkswagen Eos is the drive - it doesn't matter where or whether the top is up or down, it is a delight. There are quite a few coupe-convertibles on the road today and there's little to choose between them in terms of price and specification but the Eos has something more and is certainly one my favourite cars, this year.

Volkswagen Eos Images may not be UK specification cars. Colours and exterior and/or interior elements may differ from actual models.