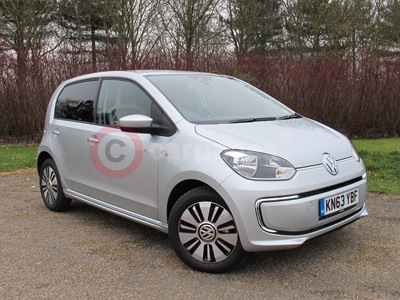 Volkswagen's smallest model is the diminutive and oddly named up! No, that's not an error. It really does have no capital letter and an exclamation mark in its name. The little up! is a small car engineered to the usual high VW standard, and despite its tiny size it has earned a full five star Euro NCAP crash test rating.

It is also unusual in having an electric version in the range, the e-up! That really is its name, although on first acquaintance it sounds amusingly like a Yorkshire colloquialism. Unlike other manufacturers electric cars, built as separate models from the regular range, this one is an electric version of a car already in the Volkswagen range, so you can choose to have the same model with either a petrol fuelled combustion engine or electric propulsion.

The e-up! has an electric motor where the engine would normally be, and a large battery storage pack installed in the floor of the car. It is also equipped with a regenerative braking system to recoup energy losses and help give it a theoretical range of up to 100 miles between recharges. These can either be done by plugging into a normal 13-amp socket, which will take nine hours to fully recharge the battery pack, or via a rapid supercharger which will cut the time to around half an hour for an 80 per cent recharge.

The e-up! is a very practical and friendly small electric car, but unfortunately like others it is very expensive in comparison with its conventionally fuelled sister model, at nearly £25,000.

The surprise about driving an electric car, if you haven't tried one before, will be how sprightly it feels. The e-up! is no exception. It sprints off the line and zips along in what feels like a lively fashion. The 0-62 acceleration time of 12.4 seconds is not particularly rapid, but this is a small car and it feels lively.

Beware, though, of being too liberal with its willing acceleration. The front-mounted electric motor has a power output of 81 bhp and it has 155 lb ft of torque on tap, but if you make generous use of the available power, then don't be surprised if the 18.7 kWh lithium ion battery pack starts to run down pretty rapidly. That is one of the Achilles� heels of an electric car: choosing between good performance and good range, because you can't really have both at the same time.

The top speed is a rather modest 81 mph, which is fast enough to keep up with the legal speed on a motorway, but without leaving much in hand. So the little car is practically flat out at a speed where other cars have much more of a margin in hand for relaxed cruising.

Volkswagen up Images may not be UK specification cars. Colours and exterior and/or interior elements may differ from actual models.