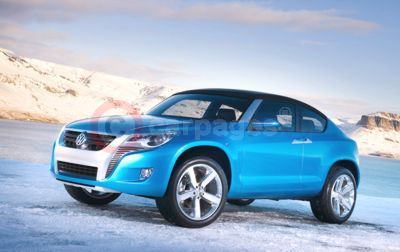 Volkswagen has revealed its latest design study, the Concept A, a crossover between a sports car and a compact SUV (Sports Utility Vehicle).

The concept combines a sleek coupe-style silhouette with the raised stance of an SUV. At the front, the shield-like front grill which is common to the Passat and Jetta has been developed to emphasise Concept A’s off-road styling by forming part of the underbody protection. High-efficiency LED headlights add a further modern touch.

At the rear, Concept A has a practical hatchback tailgate; but this is coupled to a pick-up style fold-down rear section beneath the rear LED light clusters. This hatch can be opened independently and remain open while driving so long loads can be carried.

Concept A does away with the traditional B-pillar. It features opposing opening wing doors which allow easy access for front and rear passengers as well as giving a feeling of space and light. This airy feel is enhanced by Concept A’s concertina-style soft-top which slides all the way back to the C-pillar.

Inside are four sculpted, patent leather seats and ultra-modern facia with stylish and ergonomic controls.

Under the bonnet is a 150 PS TSI engine: this uses Volkswagen’s latest turbo and supercharger technology for maximum performance but minimum fuel consumption. Designers say alternative engines, including TDI diesel units, could also be used in the concept. Whatever its source, power is distributed via six-speed DSG automatic transmission to all four 20-inch wheels using the 4MOTION system currently employed in the range-topping Passat and Golf R32.

Concept A made its world debut today in Berlin and will be revealed to the public at the Geneva Auto Salon which starts at the end of this month. Production plans for the vehicle have not been confirmed. However, the concept further expands Volkswagen’s model range, at a time when customers’ needs continue to diversify.