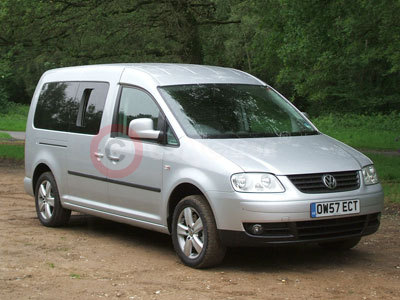 What do you get if you take an award-winning van, stretch it a bit and add two extra rows of seats? The answer is a Caddy Maxi Life.

Volkswagen’s second-generation Caddy was launched in 2004. It’s main new feature over the old one was that it was larger, but not content with that, the company decided that something was needed that fitted into the commercial line-up, in between the Caddy and the Transporter. And so the Caddy had its wheelbase stretched and the Caddy Maxi range was created and launched in February of this year (2008).

This new version of an old favourite is some 470mm longer, which means and extra 1.0m3 of loadspace, which is great if you are a courier but a tad uncomfortable for any passengers. So, they added an extra row of seats and some extra glazing and it became the Caddy Maxi Window Van but, by adding another row of seats and dressing it up a bit, you get the Caddy Maxi Life - a seven-seater MPV.

The Window Van could be considered the transitional vehicle twixt van and MPV. For instance, the van has asymmetric rear doors, as befits a working vehicle; these are replaced in the Window Van and the Life by a lifting tailgate, which is more in keeping with family and personnel carriage. However, while the tailgate is deep enough to provide shelter from the rain while the children change their boots, it does mean that a fair bit of room is required in urban environments, to open it, so parking becomes a consideration.

The passenger versions of the Caddy Maxi retain the two sliding doors, for easy access, while the side panels are replaced by windows. Those on the Window Van have the appearance of a single, glazed unit as there seems to be no C-pillars between the sliding doors. The same can be said of the Life but in this case passengers in the second row have the benefit of sliding panels in their windows, which look like portholes and are a bit odd, from the outside.

Volkswagen Caddy Images may not be UK specification cars. Colours and exterior and/or interior elements may differ from actual models.