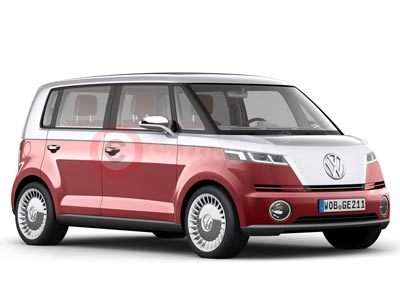 Volkswagen has unveiled an all-new concept, the 'Bulli', at the Geneva Motor Show. It is a development of the Microbus concept which made its debut ten years ago in 2001 and a new generation of Volkswagen people carrier - the first of which broke cover back in 1950 with the production of the first Volkswagen Transporter.

More compact than the 2001 concept vehicle, the new Volkswagen Bulli is powered by an electric motor and fitted with six seats and infotainment control via iPad. It is front-engined and front-wheel drive. On a wheelbase measuring 2.62 metres - slightly longer than that of a Volkswagen Golf (2.58 m) - the new Volkswagen Bulli measures 3.99 m in length, 1.75 m in width and 1.70 m in height. In relation to its width it has a wide track (1.50 m front and rear), and very short overhangs at the front and back. Its kerb weight is 1,450 kg.

This includes the weight of the energy source: a 40 kWh lithium-ion battery, which is concealed in the sandwiched floor behind the sills and powers the Bulli's electric motor. This engine produces 85 kW (115 PS) of power and 260 Nm (192 lbs ft) of torque and the theoretical driving range is up to 300 km (186 miles) - a high value for an electric car. With this electric motor, the new Volkswagen Bulli can accelerate from zero to 62 mph in 11.5 seconds and go on to an electronically limited top speed of 87 mph. The concept could also accommodate, as an alternative power source, one of Volkswagen's efficient petrol and diesel direct injection engines.

Like the original Samba bus, the Volkswagen Bulli presented in Geneva has two-tone paint and a distinctive 'V' on the bonnet; its 18-inch alloy wheels with stylised chrome hubcaps are another tribute to the Samba bus.

Inside the Volkswagen Bulli has six seats: three on a front bench seat (which can be split and folded) and three on the rear bench which can be folded flat to maximise loadspace - or turn into a bed in the true spirit of the iconic campervan. When all six seating locations are occupied, a 370 litre loadspace is available; with seats folded, the cargo capacity of the 1.8 metre long interior increases to 1,600 litres.

A removable iPad in the centre console serves as a multifunctional touchscreen. Along with Internet-based applications and the media centre, it also handles phone and navigation functions. There is no tachometer (unnecessary with an electric motor) nor a centre console, nor gear lever. The latter is replaced by a rotary switch to the right of the driver, which is used to select forward and reverse gears. A push button in the same switch is used to activate and switch off the motor. Another rotary switch to the left of the driver is used to control the lighting functions.

Such hi-tech equipment is of course a far cry from the original Volkswagen bus, the design for which came from that of Dutch Volkswagen importer Ben Pon. On 23 April 1947, Pon sketched a compact bus - a simple side view of a radically shortened public omnibus placed over the wheelbase of a Beetle with an 'm' for 'motor' written on it. This was to become the basis for the original Volkswagen Transporter or T1 which was launched in 1950 - and is still popular to this day.