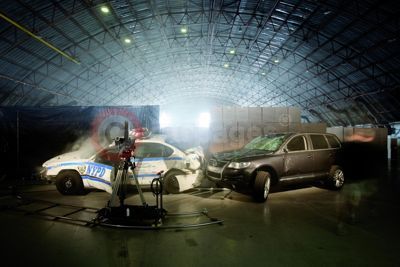 Volkswagen, whose cars can be seen speeding through the streets of Matt Damon’s The Bourne Ultimatum, has created the first freely available online stunt simulator – www.bournestuntsimulator.com – for aspiring film directors.

Film director wannabees can create a series of spectacular stunts, all from the comfort of their own home.  Volkswagen’s stunt simulator is inspired by the scenes from this summer’s blockbuster movie The Bourne Ultimatum, which features breathtaking action sequences designed by Hollywood’s leading stunt co-ordinator Dan Bradley.  Users can select from six vehicles including the Volkswagen Touareg and Golf GT cars which feature in the movie, and create stunt sequences for play-back and sharing with friends.

The simulator reveals the in-depth processes required to make a stunt and is highly intuitive and flexible.  Users can choose any combination of cars, speeds, explosions, props and sound effects to create original, nail-biting action.  Behind the scenes videos and interviews with the stunt crew can also be viewed on the site.

Volkswagen Marketing’s Sally Chapman said: ‘The stunt simulator puts movie fans at the heart of stunt scene co-ordination.  Users can experiment with hundreds of different camera angles, and edit sequences of events just like they would if they were making a real film.’

Volkswagen has created the stunt simulator as part of its ‘See Films Differently’ campaign, designed to encourage film fans to see movies from a different angle, provide them with additional content from the film, and offer an alternative viewpoint to enrich their film experience.