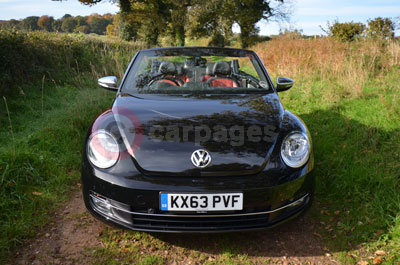 The third generation Volkswagen Beetle Cabriolet went on sale November 2012, with the first cars arriving with customers in April 2013. We tested the Beetle hatchback in September 2011 and concluded that it was “huge improvement” over its predecessor.

The Beetle Cabriolet is produced at Volkswagen’s Mexican plant at Puebla alongside the Beetle hatchback.

Volkswagen also produced three special editions based on the ‘Design’ specification to celebrate the launch, these were the ‘50s Edition’, ‘60s Edition’ and the ‘70s Edition’.

We tested the Volkswagen Beetle Cabriolet ‘50s Edition’ powered by a 1.4-litre 160 PS engine mated to a 6-speed manual gearbox which at the time of testing cost £24,895 plus options which included the RNS 315 navigation system (£305), ‘Fender’ premium sound pack (£525), light and sight pack (£95) and wind deflector (£275). Our test car was finished in Monochrome Black with a black powered hood with a Salsa Red / Black ‘Vienna’ leather upholstery - which was the perfect combination for the car.

We tested the 1.4-litre 160 PS engine which features both a supercharger and turbocharger - so do not be deterred by engine capacity, it is capable of 0-62 mph in 8.6 seconds and a top speed of 128 mph, which in our opinion is a perfectly acceptable blend of performance and economy. It can feel a little underpowered at times, especially up hill.

On paper the 1.4-litre TSI engine is capable of 32.1 urban mpg, 50.4 extra urban and a combined figure of 41.5 mpg (all NEDC figures) - we were achieving around 28 mpg touring, raising to mid-thirties on the motorway.

You would not mistake the Cabriolet's handling for that of a hot hatch - and why should it handle like one - it is more about cruising than out and out performance. It does feature multi-link rear suspension across the range whereas the hatchback has to settle for a torsion beam arrangement on the lower spec models. The electric power steering can feel a little remote, but again we do not think it will bother you too much. -Ride wise it can feel a little un-settled but you learn to live with some imperfections for such a beautiful cabriolet.

If you are looking for a more spirited drive then the MINI convertible might be a better option but the Beetle feels like a more complete car.

We found access to the handbrake annoying as it sits under the centre console but overall nothing will disappoint.

This is a 7-year+ news article, from our Volkswagen archive, which dates back to the year 2000.

If in doubt check with your local Volkswagen dealer as car prices and technical data will have changed since 2013.