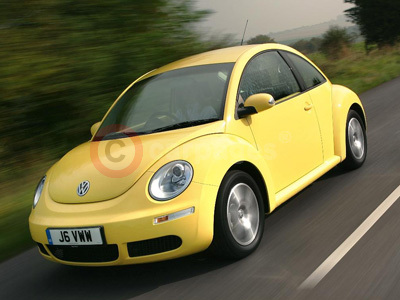 Unbelievably, ten years on from the new models introduction, little has changed and it still raises passing smiles and waves.

In September 2005 the '2006 model year' Volkswagen Beetle was given a face lift. The bumpers and wheel arches were revised giving sharper edges than before; while restyled headlights, front indicators and tail lights with white circles inside the red circles were added to freshen the appearance. The 'VW' emblems were also modified at the front and rear.

Prices when tested range from £13,065 to £18,330 for top of the range 1.8 petrol turbo. Interestingly the entry-level Volkswagen Beetle is cheaper than a Volkswagen Golf, which surprised us.

The engine is quite flexible; although turbo lag is present it did not really bother us - although sometimes the engine can feel a little gruff.

The five speed gearbox felt a little notchy but you do get used to it and we were always looking for a sixth gear on the motorway.

Volkswagen quote fuel consumption figures of urban 25.7 mpg, extra urban 44.1 mpg and combined 34.9 mpg. Overall we averaged around 30 mpg over a 250 mile mixed driving route; with a little bit more care we saw 34 mpg on quiet 'A' roads. Considering our route and that the engine hard barely been run in - we would consider this figure quite reasonable.