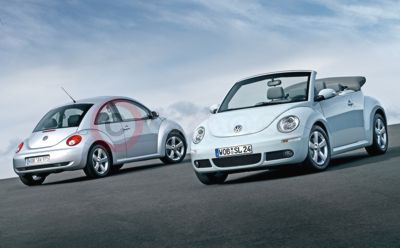 The latest Herbie movie stars Lindsay Lohan, Michael Keaton and Matt Dillon, and is released in the UK on 12 August. In the film, Herbie, arguably the world’s most famous original Beetle, is unwittingly rescued from the scrapyard by Maggie Peyton (Lohan), who buys ‘Number 53’ for cheap college transport. Within minutes Herbie springs into action and wins a street race, setting the scene for a full NASCAR showdown.

But even Herbie cannot resist the charms of the New Beetle, as he falls in love with a Sunflower Yellow model during the movie. And to increase further the evergreen appeal of the model, launched in 1998, a mildly facelifted New Beetle goes on sale in the UK this September.

The new model features revised bumpers and wheelarches, with sharper edges than before, plus subtly restyled headlights and front indicators, and tail lights with white circles inside the red circles. The ‘VW’ emblems have also been modified at the front and rear.

In addition, a new range of colours and alloy wheels will be made available, complemented by new fabrics for the interior. Chrome adorns the air vents and surrounds the instruments, for an even higher quality feel inside.

The New Beetle and New Beetle Cabriolet will carry over the existing range of engines (five for the hatchback and five for the Cabriolet), which includes 1.4-litre 75 PS and 1.8-litre turbo 150 PS petrol units. The exception is the frugal 1.9-litre TDI diesel, which has been slightly uprated to 105 PS. Recommended retail prices and model specifications will be announced closer to launch in September.