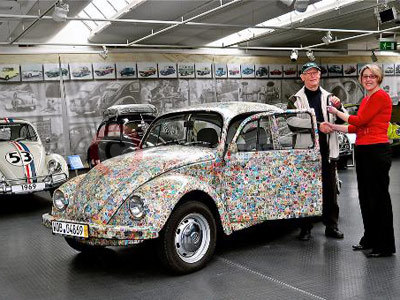 When The Beatles covered The Marvellette's 1961 hit 'Please Mr Postman', they probably never dreamed it would be the perfect tribute to a Volkswagen Beetle exhibit in the Volkswagen Automuseum nearly 50 years later.

But it seems the song could have been written for the 'Briefmarken-Kafer', or 'Stamp Beetle' which has gone on display at the museum this week.

Created in 1997 to mark the 50th anniversary of the Wolfsburg Stamp Collectors Association, it is an old Volkswagen Beetle, covered in 50,350 stamps donated by collectors from across the world.

Since its creation it has been used at stamp collecting exhibitions across Germany and neighbouring countries, but has now come home to rest in the Volkswagen Automuseum. It was handed over by Wolfgang Heuberger, outgoing chairman of the Wolfsburg Philatelists.