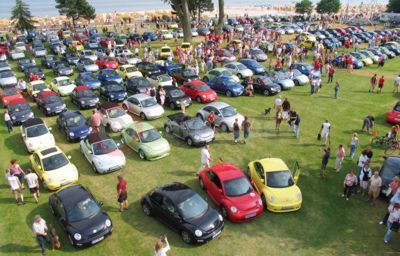 The millionth Volkswagen New Beetle will run off the production line this summer. To mark the occasion, enthusiasts from all over Europe will meet in exactly one month’s time on the New Beetle Sunshine Tour. In addition to standard models from the New Beetle and New Beetle Cabriolet range, many custom cars with special paint finishes and completely revamped bodies will be joining the parade along the Baltic coast. The Baltic Sea Tour starts on Sunday 14 July in Lübeck. It will finish with a flower-power party featuring the New Beetles at the Grömitz promenade.

The private initiative “Beetle Sunshine Tour” was launched by New Beetle Cabriolet owner Gabriele Kraft from Lübeck in 2004. She is organising the tour for the fourth time. “This meeting is not just about beautiful cars, but about the people that love the New Beetle,” she says. 135 entry forms have been received from all over Germany and its neighbouring countries. Gabriele Kraft is optimistic that the cars meeting at Grömitz beach will number 250 for the first time.

This does need a large amount of planning as there will be a stage at the finish on which everybody can present their favourite car. There will be concert by a surprise act later on. “In the morning, the cars will be on show in the P+R car park at VfB-Lübeck/Lohmühle football club before we head towards Grömitz promenade with a few fun stop-offs along the Baltic,” says the organiser.

Any interested New Beetle drivers can register free of charge on the website at www.beetle-sunshinetour.de . The New Beetle Sunshine Tour is supported by Volkswagen and Grömitz council.