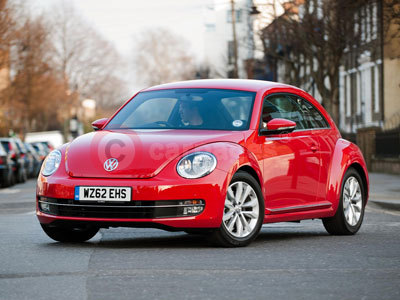 Volkswagen has added two-new engines to the VW Beetle line-up with prices now starting at £15,195 for the 1.2-litre TSI 105 PS 6 speed manual.

The two new engines derivates are available to order now with a delivery date in January 2013 - a 1.2-litre TSI 105 PS with a six-speed manual gearbox (joining the DSG version of the same power plant) and the 1.6-litre TDI 105 PS with BlueMotion Technology which is offered with either a five-speed manual or seven-speed DSG transmission.

The entry-level 1.2-litre TSI with manual gearbox is priced at £15,195 which is £1,405 less than the current starting point for the range (for the same 1.2-litre engine but with a DSG gearbox).

The 1.6-litre TDI engine with BlueMotion Technology modifications means that you can now buy a Beetle with carbon dioxide emissions of 113 g/km   As well as bringing lower CO2 values and a combined mpg value of 65.7, the addition of this smaller engine lowers the threshold for diesel-powered Beetle ownership by over £3,000, with the 1.6-litre TDI costing £17,030.

When the Volkswagen Beetle was launched in the UK in March 2013 there was just one engine and trim level available.  Since then new models have been added, with the latest two entry-level engines and gearbox combinations completing the range.  Three standard trim levels – Beetle, Design and Sport – are now available, as well as the range-topping Turbo Black and Turbo Silver special editions.  Customers can now choose from three petrol engines – a 1.2-litre TSI 105 PS with manual or DSG gearbox, a 1.4-litre 160 PS with manual transmission and a 2.0-litre 200 PS with manual or DSG gearbox; and two diesels – the 1.6-litre TDI 105 PS with BlueMotion Technology (Stop/Start and battery regeneration added) and the 2.0-litre TDI with 140 PS.