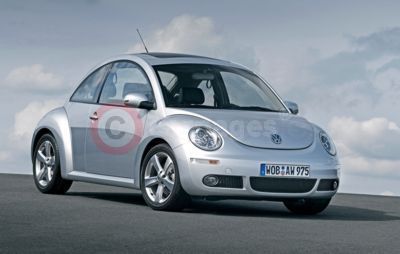 Volkswagen has announced recommended retail prices for the facelifted New Beetle, which goes on sale in the UK during September. The subtle restyle of the classic New Beetle shape coincides with the arrival of Luna models - extra value entry-level variants for both the hatchback and the Cabriolet.

Beetle mania gripped central Berlin last weekend, as thousands of examples of Volkswagen’s iconic model lined the streets to celebrate the launch of the new Disney film ‘Herbie Fully Loaded’. The Herbie Parade involved thousands of Beetles and New Beetles, including a number of special versions. One such vehicle was the very last example of the 21,529,464 original Beetles made overall (before production ceased in Mexico in 2003).

There were also a number of early 1950’s models, and the summery weather encouraged a healthy showing of the Cabriolet - both of the original Beetle and the New Beetle.

The restyled New Beetle looks set to continue the success of this distinctive and loveable car. Its new look features sharper edges to its wheelarches and bumpers, along with subtly reshaped headlights and red round tail lights with white circles contained within. The ‘VW’ emblems front and rear have also been revised.

In addition, a new range of colours and alloy wheels will be available at launch, complemented by new fabrics for the interior. Chrome adorns the air vents and surrounds the instruments, for an even greater feeling of quality inside.

The refreshed New Beetle is available to order now from Volkswagen Retailers, ahead of its official launch date next month.