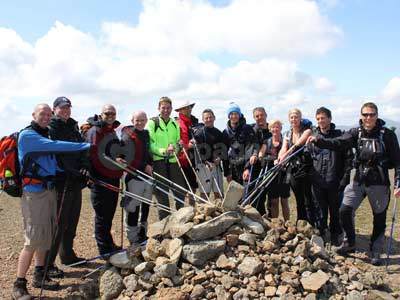 Volkswagen Staff on The 24 Peak Challenge

14 Volkswagen Financial Services (VWFS) and Volkswagen Group staff members from Milton Keynes took part in the 24 Peaks Challenge, and raised more than £19,000 for the armed services charity Remount. 24 peaks over 2,400 feet in the Lake District were climbed by the team in 24 hours total walking team.

The 24 Peaks challenge occured over the weekend of 9th July 2011, starting at 5.30am on Saturday, with the team tackling 10 peaks, including Scafell Pike, England's highest mountain. Day one covered 17.5 miles, completed in 12 hours and 25 minutes. Sunday had a start of 6am to cover the remaining 14 peaks and 14 miles which were covered in 9 hours. The team covered 13,000 feet - more than half the height of Everest - in a total time of 21 hours and 35 minutes.

Graham Wheeler, managing director of Volkswagen Financial Services said, "This is a fantastic result for the team, to raise so much money for Remount and to finish the challenge in such a good time is wonderful. The entire company has been fund raising for months and we even had a visit from four soldiers from the Royal logistics Corps to encourage staff donations. The team at VWFS have a history of raising money for charity last year 34 people cycled in the London-to-Brighton bike ride, raising £16,000 for the British Heart Foundation, this was a against a total of over £120,000 which was raised for a number of charities."

Remount provides help to Armed Forces personnel as they return to Civvie Street. Remount aims to provide personnel of all ranks and status and their dependents with the psychological tools to manage the change in cultures which takes place when they resume civilian life and avoid illnesses such as depression.

General Sir Anthony Walker of Remount said, "I am full of admiration and gratitude for the team. The money raised will be invaluable in supporting the work of Remount allowing another 20 service people to benefit from the work of the charity."