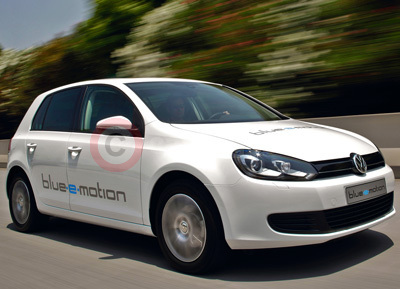 The Challenge follows a route from Madeira Drive in Brighton to Pall Mall in London, during which the participating vehicles are measured for the energy they use. The winner is the vehicle found to have used the least energy on the 57 mile route.

Leading the trio and making its debut in the UK is the new Golf blue-e-motion prototype, an electric vehicle developing 115 PS and 199 lbs ft of torque through an electric motor which is powered by a series of lithium-ion batteries with a total capacity of 26.5 kilowatt hours. Despite its advanced drivetrain the Volkswagen Golf blue-e-motion is as versatile as a conventional vehicle with the ability to accelerate to 62 mph in 11.8 seconds and a boot volume of 279 litres.

The Volkswagen Golf blue-e-motion prototype serves as an indication of the future direction of Volkswagen's electric vehicle programme with the first production model planned to go on sale in 2013.

Competing alongside the Volkswagen Golf blue-e-motion is a pair of production vehicles that are among the most efficient and lowest polluting cars on sale today and yet are both powered by highly efficient internal combustion engines. The Volkswagen Polo and Volkswagen Golf BlueMotion models, emitting just 91 g/km and 99 g/km of CO2 respectively, use a series of aerodynamic and mechanical changes to maximise the efficiency of their refined common rail TDI diesel engines. In the case of the Volkswagen Polo BlueMotion this results in combined economy of 80.7 mpg.

Based on this figure, the Volkswagen Polo BlueMotion would complete the 57-mile run from Brighton to London using just 3.21 litres of diesel (0.70 gallons) costing a total of £3.78 based on today's average fuel prices.

The first cars competing in the Challenge will depart Brighton at 08:30 before making a brief stop at Central Sussex College in Crawley en route to the finish in Central London. All three vehicles will be on display in Regent Street in London after completing the Challenge from 12:45 to 16:00.