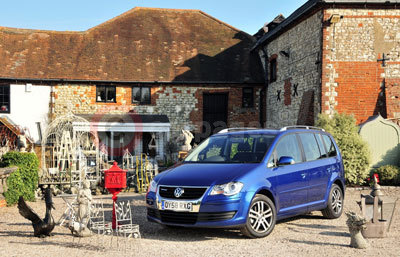 Volkswagen’s BlueMotion range of vehicles has expanded with the addition of the Touran and Sharan people carriers – which are among the most efficient seven-seater vehicles on the market.

BlueMotion represents the most efficient model in each of Volkswagen’s passenger car ranges and combines a series of small changes to the vehicle’s body, drivetrain, engine and even the tyres in order to reduce strain on the engine and, in turn, reduce emissions and increase economy.

Both vehicles feature subtly redesigned grille elements with the air ducts redirected to allow the usual airdams to be blanked-off and allow for smoother airflow over the front of the vehicle.  The ride height is also lowered to reduce drag.  Other visual and practical changes include the adoption of hard compound tyres to decrease rolling resistance and the addition of small BlueMotion badges on the grille and tailgate.

A revised gearbox with lengthened ratios in third, fourth and fifth gears is linked to a highly efficient 1.9-litre, four-cylinder 105 PS engine fitted with a new variable turbocharger to further increase efficiency in the Touran and a 2.0-litre 140 PS TDI in the Sharan.  An oxidation catalyst and Diesel Particulate Filter (DPF) are also added to reduce oxides of nitrogen and carbon particles to almost zero.

As with the conventional Touran or Sharan the BlueMotion vehicles feature seven individual seats, the rearmost of which on the Touran can be folded flat into the boot floor.  Despite the keen focus on economy both vehicles retain a comprehensive list of standard equipment, including six airbags, ABS, a CD stereo and air conditioning.

Both vehicles are now on sale with prices starting at £16,725 for the Touran and £21,290 RRP on the road for the Sharan BlueMotion.