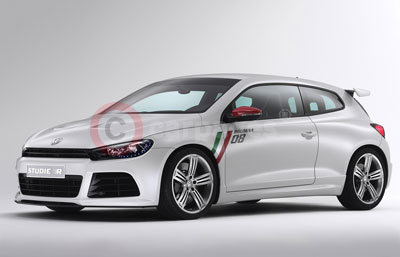 Volkswagen's latest design study, the Scirocco Studie R, premieres at Bologna and is inspired by the Volkswagen Scirocco GT24 which raced to success in its class at the Nurburgring 24-hour endurance race earlier this year. Finished in white, the Studie R has contrasting high-gloss black detailing and styling accents in red and green to the wing mirrors and on the "Bologna '08" badging, paying homage to the Show's host nation.

Inside the cabin, the Volkswagen Scirocco Studie R is upholstered with black and white nappa leather and complemented with low- and high-gloss carbonfibre trim. The Italian-inspired red and green design accents continue on the seams of the Recaro seats, steering wheel, armrest, gearknob and floor mats.