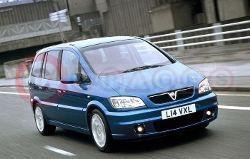 Vauxhall’s popular Zafira MPV has been hailed consistently as the class leader in the mid-size MPV market sector since it was launched in 1999. Class dominance continues with the fast moving Zafira GSi Turbo; now the family man can enjoy true versatility and hot hatch performance in one package.

At the same time, owners can enjoy fuel efficient motoring, as the results of this year’s RAC/Fleet World Mileage Marathon confirmed. Judicious use of the right foot resulted in the Zafira GSi winning overall honours by achieving a combined fuel consumption figure of 59.14 mpg.

Who said a ‘sports car’ must be a certain body style? The Zafira GSi Turbo proves otherwise, and performs two functions without compromises.

A GSi badge on the tailgate and Turbo lettering on the A- and B-pillars make the car's origins clear. External visual differences include a deep front spoiler with large air intake, individual styling of the bumpers and side sills, rear tailgate spoiler and 17-inch alloys fitted with 225/45 R 17 tyres.

At the heart of Zafira GSi Turbo is the advanced turbocharged engine fitted to the Astra Coupe Turbo. Engine power has a maximum output of 192 PS at 5400 rpm, as well as an abundant flow of torque.

Zafira GSi Turbo’s integral turbocharger concept is notable for its excellent response to pedal movements and its strong pulling power, even at low engine speeds.

Europe’s fastest MPV reaches 60 mph from a standing start in only 7.6 seconds and continues up to a top speed of 137 mph. Under full load, the engine management electronics make additional reserves of power available by allowing engine speed to reach 6800 instead of 6400 rpm.

Vauxhall’s GSi specialists have worked on the chassis to extend the Zafira’s agility and active safety still further and to match it to the turbocharged engine’s performance.

Despite changes to the chassis, all the traditional advantages with Zafira as a versatile family car have been retained. Neither the suspension travel nor the payload have been reduced, and although its settings are firmer, the sport suspension has been tuned to provide a high level of ride comfort.

Zafira’s Flex7 seat system allows for the two third-row seats to be easily lowered into the floor. It can be used as a two-seater with a load area of up to 1700 litres (by the VDA standard measuring method). The second row bench-seat can be split 40:60 and it also slides lengthways to provide between 490 and 640 litres of load space if the rear seats are folded.

If this is not sufficient, the second-row bench can be fully folded, pushed forward and secured behind the front seats.

Price on the road for the Zafira GSi Turbo is £19,995. It comes with a group 14 insurance rating