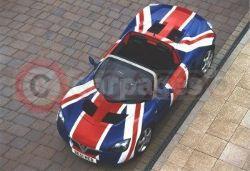 In a summer which has seen flag waving become a national pastime with the jubilee celebrations, followed by the World Cup, then Wimbledon and finally the Commonwealth Games, Vauxhall has joined the party with its own uniquely liveried VX220.

VX220’s angular lines and overall design lends itself perfectly to the Union Jack in which it is covered – a true British sports car hand-built in the UK.

The Union Jack VX220 – strictly a one-off – is being used for displays, exhibitions and shows throughout the summer all over the country, including an appearance at the British Grand Prix last month.

Reflecting its city appeal, the Union Jack VX220 was also recently parked in central London on a warm Friday evening, available for passers-by to view and, if they wished, have their picture taken alongside.

The digital images were developed and placed onto a variety of backgrounds – including a beach scene and a river-boat in front of the House of Commons – and downloaded onto the Vauxhall website the same evening, allowing the willing participants to log on to the site and forward their own picture to friends.