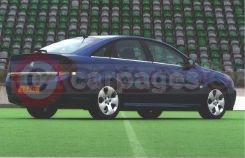 With the sporty SRi model accounting for nearly 20 per cent of sales on the outgoing Vectra, it is no surprise that Vauxhall has decided to develop both an SRi and GSi for the new Vectra.

The old model won many friends, made to look more purposeful on the road than the standard car with its spoilers, unique alloy wheels and chromed exhausts. Inside the car also got the sporting touches with its own sports dials and hugging sports seats. A lowered body, stiffened chassis and revised gear ratios rewarded more spirited drivers.

Some of the same themes are retained for the new sports Vectras. However, the big news is the amount of work which has gone into the chassis, so that the new Vectra SRi and GSi are not only distinctly different from the rest of the Vectra range - they are also cars which are unique to the UK, developed and built specifically for UK roads.

Engineers from Vauxhall/Opel's International Technical Development Centre carried out their own extensive testing in the UK to achieve the right balance in the final chassis settings for the SRi and GSi Vectras.

Their aim was to retain the ride quality and refinement of the new Vectra and its improved steering system, while providing a firmer, more sporting drive and even quicker steering response.

Changes to the standard settings are extensive:

Three petrol engines and one diesel are the line-up from launch. Early next year, the range will be expanded with a 2.0 litre turbo and 3.0 litre V6 diesel.

Initially, engine choices for the SRi are the 1.8 litre 16v, 2.2 16v and 2.2 DTi, with the 3.2 V6 being reserved for the top of the range GSi. Next year the GSi will also get the powerful new diesel while the SRi model gets petrol turbo power for the first time.

Vauxhall's new five-speed automatic gearbox is available, as an option, on SRi and GSi models in combination with the 2.2 16v and 3.2 V6 petrol engines and the 2.2 DTi.

A key feature of the new auto box is that it works 'adaptively' - it recognises the driver's style and adapts accordingly. And if the driver is in the mood for manual shifts, this is taken care of with the Active Select function.

Vauxhall's sports models have always been easily identifiable by their styling enhancements over their 'comfort' model stablemates. Changes to the exterior styling of the new SRi and GSi work especially well on the new Vectra, the larger proportions and more 'chiselled' design of the new car being well suited to the sporting touches.

At the same time, car design has moved on in recent years and the demand has grown for these models to also show a degree of subtlety when expressing any sporting credentials.

The result is two cars which feature deeper front and rear bumpers with, at the front, a unique honeycomb grille featured above and below the number plate. Colour-keyed contoured sills run down the side from front to rear wheel arch, and a subtle rear lip spoiler is featured on the tail-gate.

The rear also features a visible, oval chrome exhaust - single pipe on the SRi and twin on the GSi.

Darkened headlights and tail-lights feature on both models and each wears its own unique style of alloy wheels. On the SRi, the standard alloy is a 17 inch six-spoke design fitted with 215/50 R17 ultra low profile tyres. The GSi has its own chunky, five-spoke alloy wheel design and also uses 215/50 R17 tyres.

Step inside either car, and the changes to the interior include chrome or platinum inserts on the fascia and doors, chrome rings on the dials and gear shift housing, leather covered sports steering wheel and eight-way adjustable sports seats.

On the road prices: