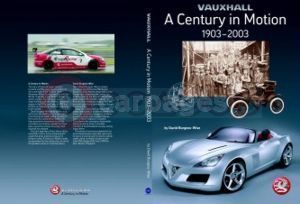 Vauxhall - A Century In Motion Published To Celebrate Firm’s Centenary

A new book is published this month (December 2003) to tell the story of Vauxhall Motors’ first one hundred years.

Vauxhall - A Century in Motion traces the story from its origins in South London to the present day, with pit stops at many major events along the way.

The first Vauxhall in 1903 was a five-horse power vehicle with room for four passengers – but no reverse gear. A total of around 40 "horseless carriages" were sold in the first year, for the princely sum of £136 each.

One of these vehicles is still in working order to this day, making it the oldest original four-seater still in existence – it even took part in the recent Lord Mayor’s Show in London, in November 2003, along with nine other Vauxhalls spanning the century.

Vauxhall - A Century in Motion follows the company’s move to Luton in 1907 – its HQ ever since, the acquisition by General Motors in the 1920s, its war effort during the 1940s which resulted in the Churchill Tank, and the opening of its production plant at Ellesmere Port, Cheshire, in the 1960s.

It also features a roll-call of classic car designs guaranteed to get any motoring enthusiast misty eyed with nostalgia, from the Hurlingham, Prince Henry and E-Type Velox in the first half of the 20th Century, to the more modern Chevette, Astra and Corsa.

Author and noted motoring historian David Burgess-Wise says: "Vauxhall is a fascinating company that has uniquely made the transition from limited production sporting cars to the provision of cars for Everyman, always with an eye to worthwhile technical innovation. And on the way it has created some immortal designs, like the Prince Henry – perhaps the first true sports car – and the 30-98, both cars I have always admired for their style and performance.

The book also covers Vauxhall’s Centenary activities during 2003, such as the hugely successful round-Britain 1,000-Mile Trial, which recreated a specially devised route from a century ago with over 65 Vauxhalls from around the world.

And it takes the story up to date with Vauxhall’s exciting new cars that will take it into its next century, such as the VX220 Turbo, Signum and Meriva – although the book had gone to press before the VX220 Turbo recently beat Aston Martin, Ferrari, BMW and Porsche to become Car magazine’s Performance Car of the Year 2003.