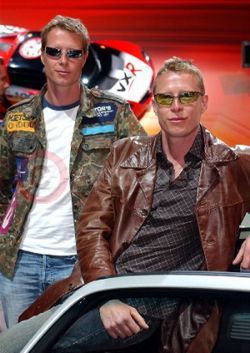 Two stars from The Matrix films made an explosive appearance at the Vauxhall stand today at the Sunday Times Motor Show Live.

Neil and Adrian Rayment, who played the evil albino twins known for their marital arts skills in the futuristic Matrix Reloaded and soon to be released Matrix Revolutions films, signed autographs for visitors to the stand. Each brother owns a Vauxhall VX220 Turbo; Adrian’s is rouge, Neil’s is black.

The Rayment twins spent last week at the Cannes film festival where they were promoting their new pilot Brit flick, Pirate, a modern day spin on swashbuckling pirate films of old.

Neil said: “It’s like a cross between Swordfish and Madmax on water, with lots of expensive yachts. We’re very excited about the prospect of this making it to the cinema”

Visitors seeking their own action adventure headed to Motropolis, a live action show set in a city of the future. Motropolis is just one of many interactive features at this year’s exhibition.