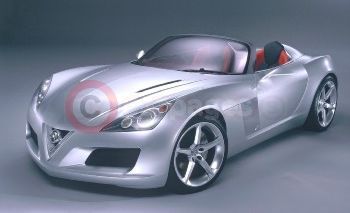 "Keep it simple, pure, and beautiful." The words of General Motors Europe president Bob Lutz when launching the Solstice concept in the US and also the basic requirement for Vauxhall’s stunning concept car the VX Lightning, launched last year to celebrate its centenary.

VX Lightning is a two-seater roadster based on the same technical foundation as the Pontiac concept Solstice, first seen at the 2002 North American International Auto Show in Detroit. Vauxhall’s roadster concept, however, has been designed for British tastes, at GM’s UK Advanced Design Studio in the Midlands.

Under the long bonnet of the VX Lightning is a new version of Vauxhall’s all aluminium 2.2 ECOTEC engine, reworked with a supercharger to produce a maximum power of 240 hp and 305 Nm of torque.

A six-speed manual gearbox is mated to the new engine, which drives the rear wheels. The chassis incorporates independent suspension, the front end using a simple and reliable strut configuration with a rack and pinion steering.

At the rear, the independent suspension is all aluminium for weight saving. Overall, the car manages a near perfect 50:50 weight distribution for the best in handling and agility.

Kevin Wale, Vauxhall chairman and managing director said at the launch of the Lightning: "This concept says everything about where Vauxhall is heading. The car represents a return to our early performance roots when Vauxhall was famous as the manufacturer of the first true British sports car – while we continue to be both innovative and bold in exterior and interior design. We have made great strides recently in terms of our interior packaging through cars like Zafira and Signum. Vauxhall is also about pure driving excitement – just look at the VX220 Turbo.

"Ultimately the VX Lightning, as a classic roadster, represents the best of our past, and our future – a vehicle that is quintessentially British."

Designed in the UK, the VX Lightning is a classically proportioned sports car with a long bonnet and short rear overhang.

There are also some subtle echoes of the past, including the rollover hoops sculptured into the rear deck and bodywork which flows down into the cabin.

Fitting for a car with the presence of the VX Lightning, it sits on 19-inch alloy wheels at the front (fitted with 245/35 Michelin Pilot tyres) while at the rear massive 20-inch alloys are fitted with 255/35 tyres.

Inside, deeply sculptured seats are finished in black and red leather, while red leather has also been used to trim the sweeping dashboard.

Following an overwhelmingly positive reaction to the car, Vauxhall continues to investigate all its options on how best to bring the car to market.