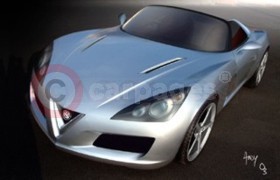 Vauxhall celebrated its centenary at the Frankfurt Motor Show with a new roadster concept designed and built in the UK.

Shown in the Opel stand, Vauxhall managing director Kevin Wale said the Lightning sent an important message that the British company remains an important part of the General Motors family.

Like the VX220 its design comes from the UK, but it is not necessarily viewed as the eventual replacement for the little sports car built for the company by Lotus.

"The Lightning is a performance car, but not one as intense as the VX220. I think the two could co-exist in the model range," said Wale.

"Vauxhall started as a sports car maker so the heritage is there. It has been quiet on this front for a while but we want to inject a little more excitement into the brand."

The car was the brainchild of British designer Simon Cox, based at General Motors’ styling centre in the Midlands.

Big news for Vauxhall at the show was the all-new Astra which will take to the roads next year. Wale said: "We have very high expectations for this car and so far it has been well received in terms of its design."

Vauxhall expects to sell around 100,000 Astras a year in the UK and the engine line-up will include brand new diesel engines developed jointly by General Motors and Fiat.

Wale is hoping the Astra will help maintain a growing market share in the UK. "It’s a tough market right now, the traditional market leaders are facing increasing competition from other manufacturers but we are holding up very well. I think we can grow our market share, but it is not something we are obsessed with."

Vauxhall currently takes 12.8% of the UK market and has been doing particularly well this year with its light commercial vehicles.

It will be losing its Omega executive model which ceases production this year. The current replacement is the Vectra-based Signum which has been slow to take off in sales terms.

Wale added: "We are not looking to do very large sales numbers with Signum. We don’t see it is as a mainstream player in this segment of the market, more of an alternative to what else is around. Generally with the products we have, particularly with new Astra I am very bullish about the future."