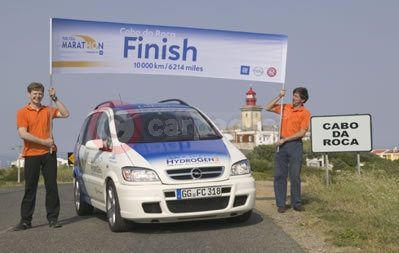 On 9 June, just 38 days after setting out from Hammerfest in northern Norway, Vauxhall’s Marathon car, HydroGen3, arrived at Cabo da Roca, Portugal – the most westerly point of Europe – having completed the Vauxhall Fuel Cell Marathon, powered by GM.

During its epic drive through Europe, the Vauxhall Zafira-based prototype covered 9,696 kilometres, nearly doubling the previous distance record for fuel cell cars and offering the public a timely answer to the deepening fuel crisis. It also proved in no uncertain way the roadworthiness of this pioneering technology – during the marathon, the hydrogen car covered a distance that directly corresponds to the average annual mileage of many car drivers in Europe.

In addition, not only did the Fuel Cell Marathon prove the viability of hydrogen-powered vehicles but also the reliability of both the cars and the fuel – in fact, despite the continuous stress to which the marathon vehicle was subjected no exceptional entries had to be made in the engineers' logbook. Furthermore, during the 20 stages of the Marathon, there was not a single report of an unscheduled stop for repair – the only repairs made were a software update at the beginning of the tour, the replacement of five temperature sensors and the exchange of the mechanical parking mechanism.

In view of these findings, the initial report on this endurance test makes very positive reading. Dr Udo Winter, Chief Engineer at GM Fuel Cell Activities, commented: "The long-distance drive went very smoothly indeed. It shows that the level of reliability attained by the fuel cell propulsion system in the HydroGen3 is already very high. We also gained a lot of new findings from the tough day-to-day marathon schedule."

The day-to-day schedule was documented on a website set up specially for the Fuel Cell Marathon. www.marathon.gm.com allowed visitors to keep track of the endurance test through an on-line diary with photos and film clips. It proved very popular and had a high hit rate with approximately 19,023 'unique visitors' registered.

However, it is not just this statistic that shows the enormous public interest in fuel cell technology. Constantly rising fuel prices are giving the issue a further boost, and brought the Fuel Cell Marathon to the attention of government ministers including David Jamieson, Minister for Transport, who was on hand to see the vehicle during its two-day visit to London. On viewing the vehicle he said: "It is great to see companies like Vauxhall bringing fuel cell technology to the UK and demonstrating the potential of hydrogen to parliamentarians, civil servants and students alike. Seeing this vehicle in operation gives us hope for the future. We must now work in partnership to ensure that this technology is brought to market soon."

In addition, in the 15 cities where the marathon stopped, the packed auditoriums of the universities and technical colleges where experts from GM gave lectures, provided further evidence of the topicality of the subject. This is one of the reasons why GM and Vauxhall have set themselves the target of developing a fuel cell propulsion system by 2010 that compares with combustion engine vehicles in terms of costs, performance and durability. Larry Burns, GM Vice President for Research, Development and Planning commented: "Only if we reach a high volume of vehicles will the benefits of the fuel cell technology for the environment become apparent and its contribution to winning independence from mineral oil really be felt."